“I think our album is like a movie or a painting… it’s meant to be the way it is, if its got French or Spanish on it, it doesn’t mean that the whole album’s gotta be translated!”

Q: The songs on this release seem to have much more of a story line, was that planned?
A: Yes! Totally…I think its important for a band to keep evolving! The Brains is all about horror zombie flicks, I wanted to get a little more “reality show” this time around, on a more personal level with the listener.

Q: Many people are saying this is the most organic, naturally progressing record the band has written.  What do you think of such claims?
A: Colin the Dead and Frank O’ Brains on the drums are renowned to be vegan zombies… we wanted to bring a more vegan ORGANIC flavor.

Q: You have guest musicians on a few songs, how did you manage to round everyone up at the same time?
A: Richie from blood sucking zombie picked up Stein, Matt and Valle of Mad Sin in his zombiespace ship, flew all the way to Montreal while Daniel de Leon from Rezurex took his rezurexomobile and we all met at a secret location….Which I can not tell you cause if I do I’ll have to eat your brain…….

Q: Do you feel the continued lineup changes helped or hurt the writing and recording of this record?
A: It totally helped! Its good to have fresh blood and brains in a band, and in the morning for breakfast.

Q: What is your favorite zombie themed movie?
A: “Night of the Living Dead”, “Cooking With the Dead” and “Calling The Dead”.

Q: Apres Cette Nuit is sang in French.  Have you ever thought about releasing two separate versions of your next CD? One in French and one in English?
A: I think our album is like a movie or a painting… it’s meant to be the way it is, if its got French or Spanish on it, it doesn’t mean that the whole album’s gotta be translated!

Q: Anything you would like the fans to know?
A: We love to meet all our fans before or after our show, because without them we would have never come this far…..oh! and if ever you want a song to be played at your show, send us a email at the brains myspace and it’ll be our pleasure to play it (we have over 50 songs).

Q: Last parting words?
A: We’ll rise, we’ll rise…. under the pale moonlight to live to die another night…..more brains! 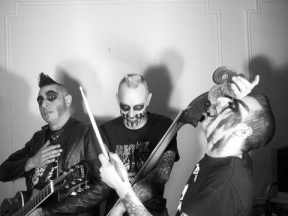