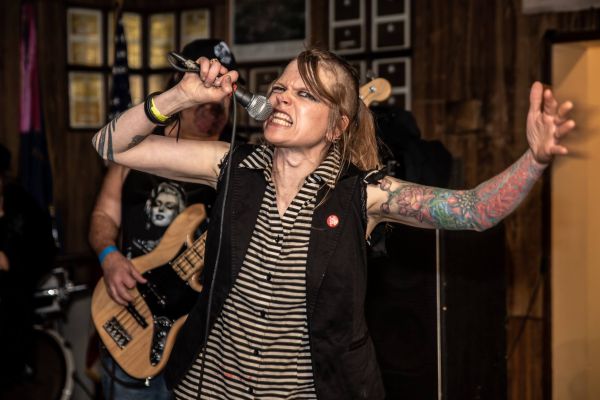 Austin, Texas-based punk rock band The Elected Officials believe in social justice and an egalitarian society and are passionate, perceptive, and pointed in getting their messages across with their songs, videos/films, interviews, and actions that they take.

The Elected Officials recently released their fiery single/video, “Death For Sale,” a raw and anthemic track from their recent album of the same name that was unleashed this past March via Grimace Records.

Lead singer Sophie Rousmaniere, who is also a documentary producer and political activist, and drummer Shane Pennington took part in our ongoing The Protest Interview series, sharing their astute and candid viewpoints on a range of relevant issues. Outspoken – and totally on-target!

Sophie Rousmaniere: I got into punk rock through activism. I am passionate about using music and art as a force for social change and empowerment. I like a song with a payoff, a hook at the end, like maybe you aren’t sure what a song is about until you feel like you’ve been punched in the stomach by the punchline.

Shane Pennington: I’m on drums... My goal as a youngster was to play as hard and as fast as I could.... Although I’ve tried to be more tasteful in my playing in my advanced age, not much has changed!

What is/are the main personal, national, and/or international issue(s) concerning you the most these days

Sophie Rousmaniere: Well, as the Elected Officials, representing the corrupt class of internet influencers also known as politicians, we support the first amendment and are working towards the eradication of public health. Just in time for COVID-19.

No but really, our new record Death for Sale has a song that speaks to the dangerous merger between Monsanto and Pfizer, the pharmaceutical giant. American culture is just plain sick. I am sure glad our dipshit- d-bag president fought so hard to kill pandemic preparation, as he reduces food stamps and school children school lunch programs and slash health benefits for low income communities.

The controlling mindset of so many billionaires in America is another topic I find curious. The Koch Brothers and their ilk and all the right wing think tanks set up, dreaming up Trickle Down economics.  American Values of “we are all in this together” go out the window while they deny its people basic human rights? I got better healthcare for my back recently in Mexico.  And have you seen Sicko by Michael Moore? Poor little communist Cuba, supplying decent healthcare?

The COVID-19 pandemic has brought up a number of issues that our band has discussed for a decade. Profits over people, with selfish politicians, allow the gun sales to reign over the majority of opposing citizens, who are supposed to remain dumb-downed consumers. This is an economy where people are trampled on holiday shopping days [and where] Wall Street bankers get bailed out again and again. Donald Trump has no shame, and he is currently the worst, but that whole Republican team has been using racist dog whistles since Reagan started, and Republicans have been suppressing minority voters and cheating in elections for decades.

The consumer class here in this country are eagerly tricked into believing that we need more than we really do. Americans are collectively ill with slavish gluttony. It is normal in the ‘land of the free’ to work 90 hours a week, which allows Americans to buy more products to drive the world economy, while many of us do not have healthcare.. What do we go shopping for all the time?

Think police state, with new powers to use surveillance on those not following orders. Will they ever honor a “Universal Bill Of Rights” and do we take care of each other? Nah, it’s everyone out for themselves. Lt. Gov Dan Patrick of Texas has a plan to save the US economy: The old folks will have to die, “Mommy, do we have to sell grandma to the Republicans or shall I shoot my teacher at school?”

OK, so that was a rant, but to answer your question, gun control and corporate politics are on the agenda after public health. A mentally ill nation shoots its school children and cons the people into buying tainted goods. There are so many things today that burn, but the good news is people are waking up, even if they have to take their psych meds to get out of bed in the morning.

Shane Pennington: I’m thinking all ties together.... As our country (and the world at large) drifts toward fascism, we realize that everything is related.... human rights, environmental issues, women’s rights, indigenous rights.... It’s really all the same, and we need to come together and overthrow the ruling elites.

Sophie Rousmaniere: “Feedlot,” [which is] about consumer culture (from the album Appetite for Corruption)

“The Lobby,” [which is] about corruption in politics (from the album Beyond Corrupt)

Shane Pennington: "Derrumbando las Fronteras" is a song about tearing down the borders; tearing down the walls that separate us as peoples; in the big picture and as people individually.... and creating a focus on the things that unite us, that we all have in common; the struggles for freedom and liberty for all!

Shane Pennington: I personally dig Ziggy Marley and the actions he’s involved with.... He’s done so much in Jamaica to bring power to the people, including organic farming, and legalizing cannabis.... His father was a groundbreaking performer, obviously, but Ziggy has done so much to benefit the people and the planet we live on.

What other forms of protest, besides through your music, are you involved with to get your message across? A loaded question, indeed, for a band built on action beyond the music.

Sophie Rousmaniere: I am a documentary filmmaker. Jay Minton and I (guitar EO, Trump Card) started a 501 3c non-profit media for public education organization, Issue Television, an organization that uses public television as a megaphone for social issues.

Our PBS feature documentary film, Yellow Fever – Uncovering the Navajo Uranium Legacy, was broadcast to over 60 million American homes four times and included in a number of lesson plans for teachers. The production took us to Washington, DC where we lobbied Congress and the Senate with a group of Navajo grandmothers seeking environmental justice in 2010. Check it out at https://www.facebook.com/Yellow-Fever-The-Navajo-Uranium-Documentary-Film-129295313787213/.

The project that makes me most proud is Radio Taboo, a community radio station we helped create for public health education there. [You can find it at] https://www.radiotaboo.com/

Our film Fracking the Contract, about groups fighting exploitative oil extraction in Southern Portugal, was used in 2017 by local activist groups to educate local populations about how to fight corporate environmental exploitation.

We have supported Food Not Bombs, who fight to feed hungry people, animal rights, and indigenous orgs… the list goes on. We’ve been registering young people to vote, in a last-ditch effort to empower the little guys.

We are currently working on a record label (Grimace Records) and re-releasing the international P.E.A.C.E compilation [originally] released in 1984 by Dave Dictor of MDC. In 1984, proceeds were donated to fight nuclear proliferation and featured 52 political bands from around the world. This time we are re-releasing it and using royalties from online streaming to support the fight to stop the coronavirus. Proceeds will go to https://mutualaiddisasterrelief.org/. Grimace Records plans a number of other releases to support causes in the coming future, so stay tuned!

Shane Pennington: I run an independent garden center focused on organic growing, and the healing of the Earth.... We can do much to change the world positively in our own backyards, literally... One small idea can lead to huge changes if it’s given room and energy to grow and transform.

Sophie Rousmaniere: Donations to http://www.issuetv.org/ are always appreciated! But really, this month we are supporting Mutual Aid Disaster Relief and #MarchforourLives, a group of young people fighting for gun safety in America.

Shane Pennington: I've always felt it’s more important to be for something than against something, especially as it relates to politics.... Love is always stronger than hate, and if we can persevere, we shall overcome... There are so many good causes today, but probably the most important movements today are voting rights movements... Voter suppression and disenfranchisement are the biggest factors in who is controlling our country right now.

Sophie Rousmaniere: I am comforted by the awareness of young people today. My daughter, my stepsons, teenagers have a twinkle in their eyes like they know something I don’t. They can’t help but have some global awareness through digital media, and although the amount of information available to youth these days can surely cause challenges, I am confident that by learning empathy early, these future leaders will fight for what is right.

Also I like that under D*ckface Trump everyone is a little angry, everyone is a little punk rock, and let’s hope they will shed their view of a righteous America in lieu of the [grim] reality: a national multi-death corporation, home of the free, land of the slave. Rock on.

Shane Pennington: The youth movements in general... A lot of youngsters are interested in literally living to an old age and therefore working towards better environmental stewardship, reasonable gun laws, and voter participation... All things are possible if we can wrest control from the oligarchy that currently controls the system.