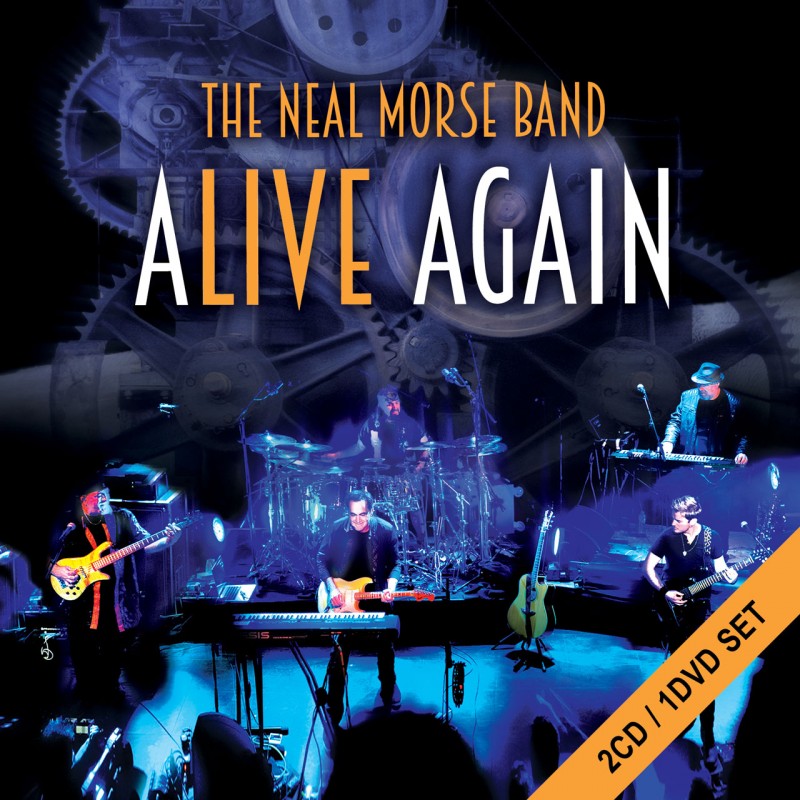 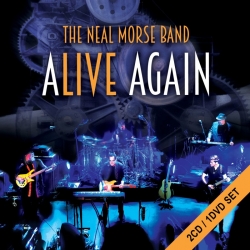 Alive Again, like the vast majority of Morse’s work, belongs in every progressive rock devotee’s collection.

American progressive rock king Neal Morse is undoubtedly one of the most prolific and jovial artists in the genre today. In addition to releasing roughly two dozen studio albums in as many years (combining his solo works with those of Transatlantic, Flying Colors, Spock’s Beard, and others, of course), he’s put out a fair amount of supplemental concert films, too. Beyond simply recreating the official tracks precisely in-person, these gatherings always feel distinctly celebratory and welcoming, as Morse can’t help but convey the joy and luck he feels doing what he loves for so many ardent admirers. His latest outing, Alive Again (get it?), is no exception. Built around and taking its name from last year’s The Grand Experiment, the nearly three-hour tour-de-force (which was shot in the Netherlands on March 6th, 2015) is another astonishing live entry in Morse’s arsenal that will wow you with both its technical proficiency and playful/heartfelt in-between moments.

Although all four members of Morse’s musical team—bassist Randy George, drummer Mike Portnoy, guitarist Eric Gillette, and keyboardist Bill Hubauer (all of whom are multi-instrumentalists, actually)—have been with him for several years (George and Portnoy were there at the start, more or less), The Grand Experiment marked the first time the quintet worked without extra musicians and billed itself as The Neal Morse Band. Naturally, the same is true here, and one of the most impressive aspects of the evening is how each member tackles multiple duties as the performance progresses. In fact, Morse assures fans that the release is “one of the finest [they’ve] ever done,” and after watching it, you’ll probably agree.

In terms of how it’s filmed, Alive Again looks and feels very much like other Neal Morse shows. Various camera angles highlight each person as he reconstructs his complex parts while basked in shifting blue, green, red, and orange lights. Of course, they also constantly exchange looks of approval as they play, which, as silly as it may sound, really gives off a family feeling. Likewise, the audience stands directly in front of the stage, enhancing the communal vibe; in other words, rather than placing a literal and figurative distance between the artists and their observers (as is typical), the two groups seem almost entwined here.

After a cinematic B&W intro (during which ominous symphonic music plays as each musician is named and shown), the group launches into the opening track of The Grand Experiment, “The Call.” Unsurprisingly, it sounds nearly identical to the studio version (including dense harmonies). Likewise, the quintet’s later renditions of “The Grand Experiment, “Waterfall,” and “Alive Again” are similarly indistinguishable from their LP counterparts (well, aside from all of the instrument switching and nod to the Beatles’ “Hey Bulldog” within the latter epic). Considering that they include these four songs, it’s a bit odd that they don’t go all the way and complete The Grand Experiment with “Agenda,” but that’s more of an observation than a criticism.

Following the aforementioned title track, Morse comments on his time in Spock’s Beard before pulling out “Harm’s Way” (from their third full-length, 1998’s The Kindness of Strangers), to which the crowd cheers and eventually starts clapping alongside. Aside from being an overall great track to recall (complete with Portnoy’s trademark percussive flair), this moment highlights how well Morse’s voice has held up over the years. In an arguably symbolic gesture of gratitude for how far Morse has come, the band then unofficially transitions into “Go the Way You Go” (from Spock’s Beard’s 1995 debut, The Light). It’s definitely a highlight of the collection.

Several other past gems appear, too, including One powerhouse “The Creation” and ? rocker “In the Fire"—both of which are complemented by chaotic flashing lights during their most virtuosic moments—as well as “Rejoice’ and “Oh Lord, My God” from Testimony. Likely the most affective moment of the night, though, is when Morse plays “There is Nothing that God Can’t Change” unaccompanied except for his acoustic guitar. As usual, he shows true passion for his messages of hope and beliefs in divine purpose, so even if you don’t follow his faith, you still feel inspired and moved by his convictions.

In addition to the concert, the DVD/Blu-ray comes with a sixty-four-minute tour documentary that’s quite interesting. As you’d expect, it shows many sides of their touring and promotional processes, including Morse speaking on the radio, the group goofing around on and off stage, several video diaries, fan interviews, and a strong amount of creative insight. There’s even a bit of drama thrown in when Morse gets sick in Switzerland and searches for medical help. It’s not an extraordinary bonus by any means, but it’s definitely a worthwhile watch because it humanizes them and reveals the ups and downs of what they do.

In the end, Alive Again follows the same template as most of Morse’s previous live releases, so your enjoyment of it will come down to how much you like the material on offer. As always, he and his band astound not only with how imaginative and sophisticated their compositions are inherently, but also how meticulously and flawlessly they recreate them on the spot. Plus, it’s always endearing to see how much excitement they feel playing together, as well as how much happiness they bring to their audience. The Neal Morse Band may’ve been doing this for many years, but they show no signs of slowing down from either age or tedium, and Alive Again, like the vast majority of Morse’s work, belongs in every progressive rock devotee’s collection.