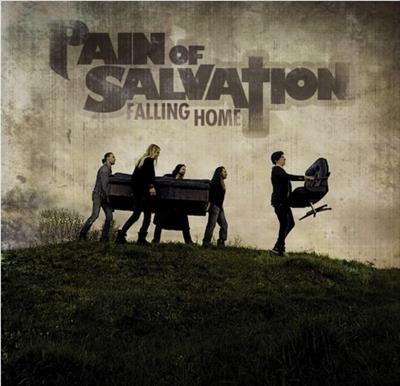 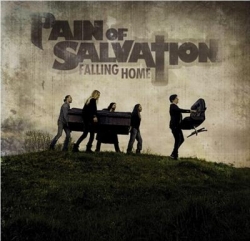 Album Review
Pain of Salvation
Label: Inside Out Music
Reviewed by Jordan Blum

‘Falling Home’ is packed with lovely reimaginings and diverse choices. It also demonstrates that truly great songwriting doesn’t need extravagant production or overt heaviness to be impactful. Pain of Salvation is just as comfortable and capable with softer instrumentation as with full-on progressive metal indulgence.

Of all the Swedish progressive metal bands to emerge over the last few decades, Pain of Salvation is easily among the most unique, multifarious, and captivating. A quintet led by vocalist/guitarist Daniel Gildenlöw (whose voice still conveys staggering range and passion), the group formed roughly twenty years ago and has released several incredible albums, such as The Perfect Element Part 1, Remedy Lane, and BE.  Their penchant for winding melodies, piercing harmonies, organic instrumentation, and dynamic swings ensures that their music is always gripping, and fortunately, their second acoustic outing, Falling Home, is no different. A collection of reimagined classics and covers (as well as a brand new title track), the record is a joyous celebration of their catalog that consistently surprises with its inventive revisions.

As any fan knows, Pain of Salvation first attempted something like this ten years ago, when they released 12:5 (which was named after the date they recorded it, May 12th). Admittedly, that set was more ambitious and special, as the group performed in front of an audience and connected the songs into three suites (“Books”) rather than have them stand on their own. Along the same lines, the song selection was stronger than it is on Falling Home since 12:5 obviously contained only material from their first few albums, whereas Falling Home favors the last few discs, which were a bit more straightforward and generic. Still, Pain of Salvation manages to make every track beautiful and intriguing in some way; in fact, several of the versions here are probably superior to their prior takes.

The sequence begins with “Stress” from the band’s debut, Entropia. Naturally, it’s a lighter rendition, with plenty of necessary space between the music to make it emotive. It’s also a lot easier to understand what Gildenlöw is singing here (the same could be said for the new adaption of Scarsick’s “Spitfall,” whose ripe social commentary is also slowed down a bit). Really, there’s a funkier edge to “Stress” as well, and the acoustic timbres add a warmth that isn’t found on the original. Likewise, “Linoleum” feels more colorful, heartfelt, and classy here than it does on Road Salt One, as the delicateness of the arrangement allows its melodies and harmonies to soar more than ever.

Two of the best songs on Road Salt Two, “To the Shoreline” and “1979,” are also featured here, and both sound wonderful, with Gildenlöw sounding as urgent and powerful as ever. Of course, the fivesome also does “Chain Sling” from Remedy Lane, and it’s expectedly breathtaking. In addition, there’s a more nuanced and contemplative nature to both “Mrs. Modern Mother Mary” (from Scarsick) and “King of Loss” (from The Perfect Element Part 1) here, making the duo feel significantly different and gripping. It’s also interesting that Pain of Salvation performed these songs in this series (with “Flame to the Moth” in-between), as Scarsick is also The Perfect Element Part 2.

There are also two covers and a new song on Falling Home. They do Dio’s “Holy Diver” in a surprisingly different style; it feels more like acoustic jazz mixed with lounge singing, rather than a heavy metal beast. Nevertheless, it demonstrates how creative Pain of Salvation is, as well as the notion that a cover of a song should do something relatively new with it. Afterward, they elevate Lou Reed’s “Perfect Day” to a melancholic yet heavenly gem. It easily bests the original, with better musicianship, a gorgeous arrangement, and Gildenlöw’s angelic singing culminating in majesty. Really, it’s one of the best songs on the entire full-length. Finally, “Falling Home” is an acoustic guitar ballad filled with elegant harmonies and poignant lyrics. It also feels like a proper goodbye at the end of the listening journey. If this track is any indication, their next proper album (of all new material) will be fantastic.

If you’re a fan of Pain of Salvation and are familiar with 12:5, you more or less know what to expect with Falling Home. Granted, it feels more private and streamlined than its stylistic sibling, but it’s still packed with lovely reimaginings and diverse choices. It also demonstrates that truly great songwriting doesn’t need extravagant production or overt heaviness to be impactful. Pain of Salvation is just as comfortable and capable with softer instrumentation as with full-on progressive metal indulgence. Either way, Falling Home is a great reminder of why the Swedish troupe is so special, and one can only hope that this collection serves as an appetizer to tide fans over until the reveal an apt new album.