The Baron of the Fjord 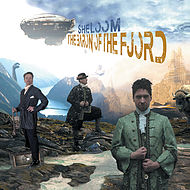 If you’re a fan of charismatic pop/rock with magnetic melodies, robust and cheerful foundations, and vivacious orchestration, ‘The Baron of the Fjord’ will reign over you in the best ways.

One of the greatest ways advancements in modern technology have impacted musicians is granting them the ability to work together without actually being together. After all, an entire album can be made without its creators ever stepping foot in the same location. Such is [mostly] the case with “transatlantic” trio SheLoom. Founded in 2008 by Jordan Zadorozny (who lives in Canada) and Filippo Gaetani (who lives in Tuscany), the group added Eric Matthews (whose location is unknown, to be honest) in 2013 and quickly set out to produce its sophomore LP, The Baron of the Fjord. Despite whatever difficulties went into making it, the record is triumphant. Packed with warm and ambitious arrangements, dense harmonies, and soothing melodies, it’s an immensely uplifting and colorful collection that mixes the pop charm of the ‘60s (and by subsequent influence, the ‘80s) with a contemporary attitude and approach.

Aside from “a rushed 10-day recording session,” most of the music was “recorded separately, with files being sent back and forth over the internet.” Like its predecessor, Seat of the Empire (2010), The Baron of the Fjord “boasts a filmic, art rock bedrock tempered with elements of new wave, 70's rock and orch-pop.” Although the trio has earned comparisons to XTC, Todd Rundgren, Yes, and Fleetwood Mac (I’d also add The Flaming Lips circa At War with the Mystics), it’s the way they fuse such techniques into an original melting pot that makes their sound so enticing. For sure, The Baron of the Fjord is a sundry treat from beginning to end.

“America on Fire” sets the stage with folk rock elegance, as smooth acoustic guitar strums anchor simple percussion and pleasant singing. Naturally, there’s a hint of Rubber Soul-era Beatles here, as well as a few similarities to the criminally underappreciated group The Great Depression, yet the tones and intricacies of its piano and guitar parts allow it to feel unique enough. In contrast, there’s a grandiose, synth pop edge to “It Takes a Wrecking Ball” and “Corridors,” which is due in large part to the raspier, deeper vocals and symphonic coating. The duo is memorable enough on its own, but their true merit lies in demonstrating SheLoom’s versatility.

A bit later on, “The Interloper” ventures further into mixing colorful pop/rock with forceful orchestration (think Super Furry Animals), while the graceful complexity and variety of timbres and motifs makes “White Skies” an incredibly cinematic and endearing instrumental. “Moroccan Mint” returns to a straightforward pop/rock grounding for one of the most engaging choruses on The Baron of the Fjord; it’s nearly impossible not to smile as the upbeat music and singing cascade over your ears. Thankfully, “Caves and Shadows” is a fitting finale, with lower vocal harmonies, a carnival-esque tempo, and psychedelic effects helping it stand out from its predecessor. It’s not the most immediately gripping track on the album, yet its sense of closure and majesty leaves listeners feeling content nonetheless. In other words, it’s not the best selection overall, but it’s arguably the best way to end.

The Baron of the Fjord oozes fearless exploration and visionary commitment; no two songs sound especially alike, and each offers something truly special. While traces of the aforementioned predecessors do appear, SheLoom embraces them as a starting point for innovation rather than as an easy means to an end. Truthfully, fewer and fewer bands these days are this ambitious, multifaceted, accomplished, and surprising, so the sheer level of diversity and density on display here is that much more commendable. If you’re a fan of charismatic pop/rock with magnetic melodies, robust and cheerful foundations, and vivacious orchestration, The Baron of the Fjord will reign over you in the best ways.