When Dracula Thinks "Look At Me" 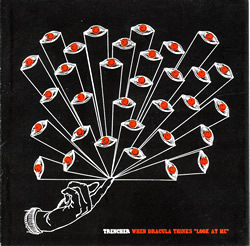 Your apocalyptic nightmares have a new soundtrack

TRENCHER'S new CD, "When Dracula Thinks, Look At Me, is a riot. And I mean that in a good way. These English blokes have a great sense of humour and the grind-core, speed-core riffs to back it up. It took me a few listens to appreciate the humour in the lyrics which are spit out at screaming full throttle with deep gravel, aka death metal style.

From the opening growls of "Head Trauma" to the noise fest of "Theodore'O''Nam this record is a blast! This record is like Ween playing Speed-Thrash Death Metal. What really sets these guys apart from that crowd is the Casio playing of M. Shit. M. knows when enough is enough and that makes all the difference here. If you're a fan of the Crust-core set, try this record out for a, soon to be a fave in your collection. TRENCHER is touring the US in November. I would love to see these guys live but alas, they will only be on the East Coast and traveling as far west as Chicago. So check your local listings and raise a pint to TRENCHER. Your apocalyptic nightmares now have a new soundtrack, and if we're all gonna go; we might as well go out laughing. Casio's for everyone!

death and the sea