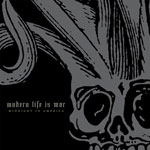 Album Review
Modern Life Is War
Label: Equal Vision Records
Reviewed by KeithRosson
Goddamn it. This is the third review I've written of this record. The first one lauded it, the second one talked about how it was, in some ways, a disappointment. And now we're here. So...

I'm obviously still not sure how I feel about Midnight In America.

The band remains a goddamn anomaly. Having reviewed their first two full-lengths for Rebel Noise, I'm coming up short as to how to describe the subtle nuances that mark Midnight In America as a departure for the band, and also how similar it is to previous endeavors. I mean, they're still one of those rare bands that are so powerful and atmospheric yet don't have one single, tangible, discernable hook in any of their songs. Yet while their previous record, Witness, seemed epic and seamless, punishing and soaring from start to finish, Midnight In America is obviously a collection of songs ﾖ they still flow together fairly well, but there are moments that jar you out of any potential reverie the band's trying to create.

Where the production of Witness and My Love, My Way placed Jeffrey Eaton's vocals nearly at the same level as the instruments ﾖ merging his voice with the instrumentation in such a way that you had to strain at times to hear him above the din ﾖ he's up front and center here and it still throws me every time I listen to the album. But despite the production choices and the fact that maybe the songs here aren't quite as pitch-perfect and awesome as their last album... it's still goddamn good. It's still a record that definitely creates a sense of atmosphere and place, that still frequently brushes with an almost jaw-dropping anthemic quality. Eaton's lyrics are still excellent, bringing to mind decaying rustbelt towns, youthful frustration, and a sense of the hopeless doing constant battle with gratitude and the joy of being alive. Ultimately, whether or not Midnight In America is as good as their previous efforts should be up to each individual listener. What I do know is that while they may have strayed minutely from their previous template, they're still the same band. They couldn't be mistaken for anyone else and Midnight In America is still head and shoulders, in both impact and intelligence, above what passes for hardcore these days.

Where The Fun Never Sets, Vol. 1

When Dracula Thinks "Look At Me"