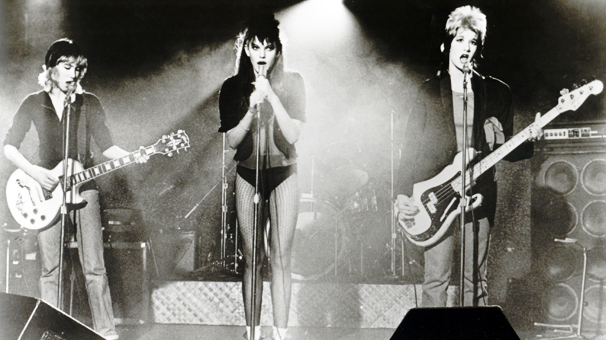 You remember the female punk band the Stains from the early '80s -- a trio of girls in their teens who ran away to tour with the bands the Metal Corpses and the Looters? The Stains were best known for songs such as 'Waste of Time' and 'Professionals,' not to mention their skunk hairstyles and female fans who dressed like them. Or might you even recall lead singer Corrine Burns saying to the audience: "We're the Stains, and we don't put out."

It's been written that the Stains, thanks to their feminist attitude, had influenced a generation of female punk rockers including L7 and Bikini Kill. In reality, however, the Stains only existed as fictitious characters in a 1981 movie, 'Ladies and Gentleman, the Fabulous Stains,' and were portrayed by then-young actors Diane Lane, Laura Dern and Marin Kanter. Directed by Lou Adler, the film also featured Ray Winstone and Christine Lahti, along with former Sex Pistols' Steve Jones and Paul Cook, and the Clash's Paul Simonon. Now 27 years later after its initial release, 'The Fabulous Stains' will be on DVD for the first time today.

Fee Waybill, the real-life singer of the Tubes, played vocalist Lou Corpse of the Metal Corpses in the movie. At the time Waybill had high expectations for the film. "I had my whole career planned out after I did this movie," he says. "'This is gonna be big time ... and I'm gonna be a movie star.'" He adds: "The thing never got released and they kept selling it from one studio to the next."

It was seeing Waybill at a Tubes concert that director Adler decided to cast him for the role of Lou Corpse. Back then Waybill played a character onstage named Quay Lewd, a parody of glam rock stars. "[Adler] thought it would be hilarious to have me play the character [of Lou]," Waybill says, "because he wanted the movie to be realistic."

The movie shows the conflict between the different musical generations when the rock band the Metal Corpses is paired on a tour with the punk group the Looters, played by Winstone, Jones, Cook and Simonon. Outside of the movie Waybill says that himself, Jones and Cook were tight. They were in a bar in Vancouver, where the movie was being shot, when some female admirers recognized the former Pistols.

"These chicks would go berserk for them," Waybill says. "After a little while, the Canadian hunk-type boyfriends would get pissed off. I remember at the end of the night where people wanted to beat them up. I would call a cab and at the last minute we'd turn and race out the door!"

At times the film shooting took on an ad-libbed, improvised atmosphere. For example one scene called for Ray Winstone, who played Looters' singer Billy, to assault Waybill during a ride on a tour bus. "Ray gets pissed off,' Waybill says. "He comes back and he just hits me as hard as he can right in the eye. Oh my God, he just knocked the s--- out of me! The cameraman is going, 'Oh this is great!'"

For his part, Waybill taught actors Diane Lane and Laura Dern how to perform like musicians. He particularly remembers Lane, who played Stains singer Corrine Burns. "Every single guy on that set was drooling all day long for Diane. She must have had 15-20 people hit on her every day. It was hilarious."