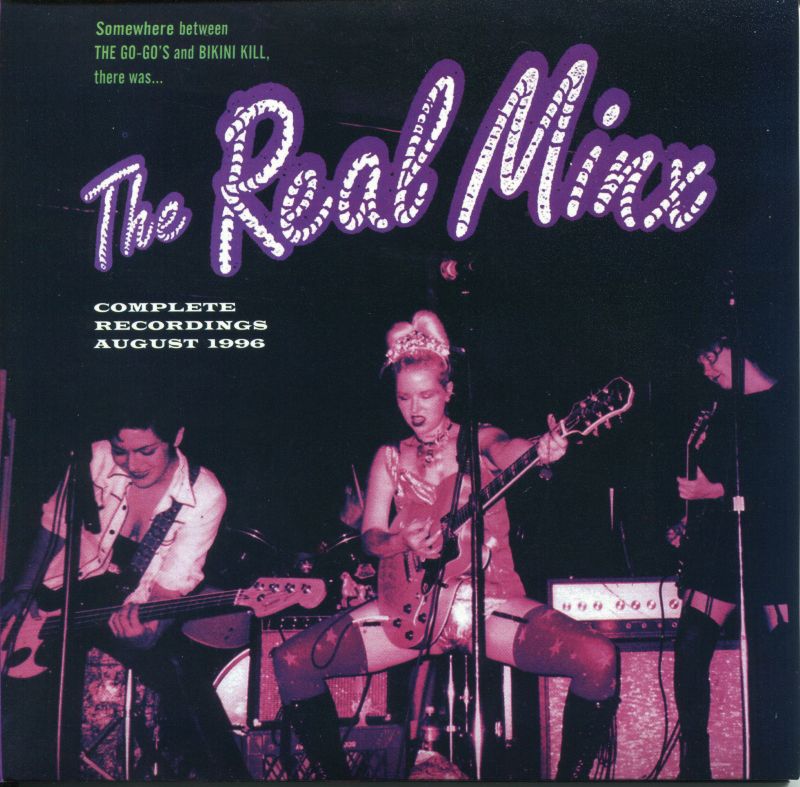 The Real Minx were a real DIY, truly indie rock ‘n’ roll outfit from the 1990s who didn’t have much to their collective name at the start, except the drive to be in a band and passion to make music.

The four pals who were mutually enthused by rock bands that included the Muffs and Motorhead, decided they had to get in on the music action, even though it was tough at first - but they always had a spirited attitude through and through!

Garcia recalls, “We practiced twice a week. We were terrible, and then after a while we were great. We played crap shows for no money. I dreamt in song. It was pure, rock and roll joy. I lived for it.”

Gottlieb, who also played in The Cripples and is currently in Cape Fury, adds, “Living in Orange County was plastic and alienating and it took goofing around with the Minx to make it okay.”

Hobensack concurs, stating, “Mostly for me it was all about fun, friendship, and the music that brought us together during those down and out times. No car, no money, but always had the laughter, good times, and The Rock!!”

Boldyn, who also played in The Angoras and The Heels, concludes, “It was in the Minx I found true friendships, a way to channel my anger, harness my energy (somewhat), and unleash my creativity.”

“Every show was jumping out of a plane and I knew Lynn, Camille, and Allie would step into a freefall of our glorious loud music and harmonies with me.”

Record label Sympathy For The Record Industry has resurrected The Real Minx’s output on a gatefold double 7”, along with flyers and the band's history, which releases today, August 6th.

A limited number of copies will include a special poster made by Garcia.

Titled Complete Recordings (August 1996), the 7” houses 5 tracks that were originally recorded by Mike McHugh at The Distillery analog-style onto 2-inch Ampex tape on 16 tracks, then mixed down to 1/4 inch tape.

The band members played the songs all together in the main room of the recording studio, deep into the coffee and cigs while listening to the playbacks.

Two of the songs were self-released as a single, and the tune “Heather Hotwheelz” was part of the Alright This Time Just The Girls: Volume Two compilation (which featured artwork by Camille Rose Garcia).

In 1997 the now-defunct RIP Magazine described The Real Minx’s music as “raw punk with a screw-you attitude” and a “cross between The Go-Gos and Bikini Kill.”

Garcia is internationally known in the art world, with her work featured in magazines including Rolling Stone and Modern Painter. She is included in collections at the Los Angeles County Museum of Art, The Resnick Collection, and the San Jose Museum of Art. Her most recent endeavor is illustrating the children’s classics Alice's Adventures in Wonderland and Snow White.

"Fueled by lust, caffeine, and being broke, our sometimes angry,  always sassy songs voice our female strength and punk attitude. We were driven by the realization we had the power to make music and fans from prison."

EP-opener “Heather Hotwheelz” is a rough-hewn, but rollicking surf-rockabilly punk track that bops with defiance.

Next number “Search and Destroy” restlessly circles with fuel-burning guitars and aggressive vocals.

“Gasoline” is a loping bass line-led romp that includes wavering ’60-era keyboard notes, while “Tastes Like Chicken” is a riled-up rant about those who don’t care about “authenticy” and “diversity.”

Last track “In and Out” is a sleazy groover that on its surface is about fast food, but is really about gettin’ down ‘n’ dirty…