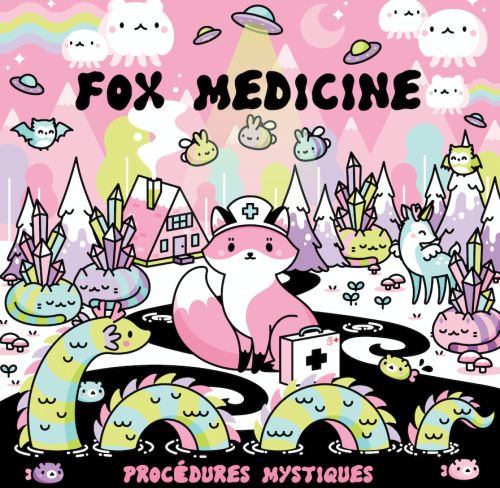 Weighted down by massive drum thumps and fuzzily grinding guitar riffs that sometimes blaze out with rapid-fire abandon, each number is also marked with oft-bizarre lyrics that Dynamite enunciates with a child-like sing-song delivery.

Despite, or maybe because of, the wild hybrid sound and the combination of such extreme music (sub-)genres, the overall effect of the album is a heady trip that needs to be blasted at full force from the speakers, especially to feel the cavernous rumble of the low-end sonics.

“Procédures Mystiques is a strawberry milkshake you drink as you walk through a dark alley of some creepy fairy tale,” Dynamite hypothesizes. She insists that the album has therapeutic properties, saying, “I hope this record is a soothing experience for people, the way a certain heaviness and intensity is so nourishing when nothing else will do.”

Dynamite had been experimenting with her songwriting and sound for years in various underground bands until one night she met Keeps at a show. The two bonded musically and started recording "fuzzy DIY demos" and playing gigs in late 2016.

They ran into their dream producer Kasai while chowing down at a North Portland venue. After the trio spent five days in the studio, Kasai revealed that Fox Medicine was the “weirdest band” he’d ever worked with. The weirdness was infectious, so be sure to catch this one – as well as see the band on their Bubblegum Doom Tour Dates (see info below).