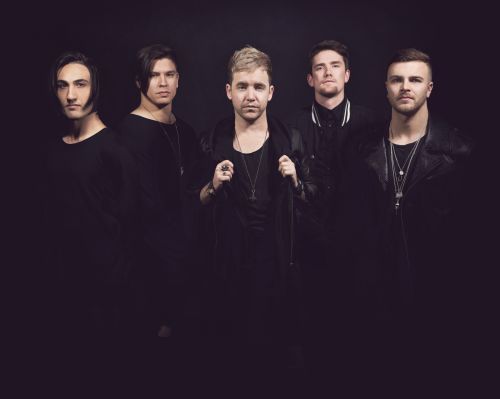 Hailing from New Zealand, electrifying alternative rock band Written By Wolves set themselves apart from the pack with a vivid hybrid sound that rips pieces from the rock, metal, pop, and electronic genres and crushes them into a whole new entity.

Written By Wolves are unleashing their debut album, Secrets today via Tenfold., and Rebel Noise is super-stoked to be hosting its premiere.

Written By Wolves are the most streamed rock band to come out of New Zealand with more than 125K monthly listeners on Spotify and over 10 million views on YouTube. They’re renowned for their highly energetic live shows and have shared the stage with big names like Machine Gun Kelly, Limp Bizkit, Suicidal Tendencies, Escape The Fate, and more.

Debut album Secrets boldly reveals the power and range of the band, showcasing how far they have evolved since first starting out. The band members’ talent and passion are on full display on each track.

Lead single “Tell Me What You’re Running From” smoothly slides through emotive pop vocals, heavy guitar churn, and punchy drum strikes until it whips up into a propulsive storm by song’s end.

The vibrantly marching title track features crisply clacking percussion and an emphatic drum beat that bounce off catchy vocal melodies to create a dance-rock vibe that gets the body moving.

“As Long As It Takes” lunges with hard guitar slabs and a slamming drum beat, but is leavened by lighter vocals on the verses. The chorus sections sweep upwards with dramatic radiation as Murphy flies to the sky vocally.

Burgeoning electronics open “Let It Burn” before driving guitar scintillation, sparking percussion, and pronounced drumming take over with Murphy admitting, “I know you didn’t start the fire,” but then frustratedly venting, “I’m so damn tired of putting all these fires out.”

They attack with heavy metal fervor on “Better Luck Next Time”, which swings hard with a swirling tempo, rapid-fire drum blasts, and end-of-tether vocals.

“Demons” floats by on achingly reflective boy band-like (Yes, really!) vocals with Murphy murmuring “What I would give for a day / without these shoes / made of concrete…”  – until an electronic dance groove suddenly ramps up, and then just as quickly, is annihilated by wildly hard-charging sonics and vocals.

“Feels like a cyclone / closing in on me / Floats like a butterfly / stings like a goddamn bee.”, the opening lyrics of “Be Careful What You Wish For” are very telling because those words captures the essence of this album – one of emotional and sonic turmoil – of pulverizing force, but at times a fragile beauty, and a restless psyche that’s ever-searching in the wilderness that we call the real world.