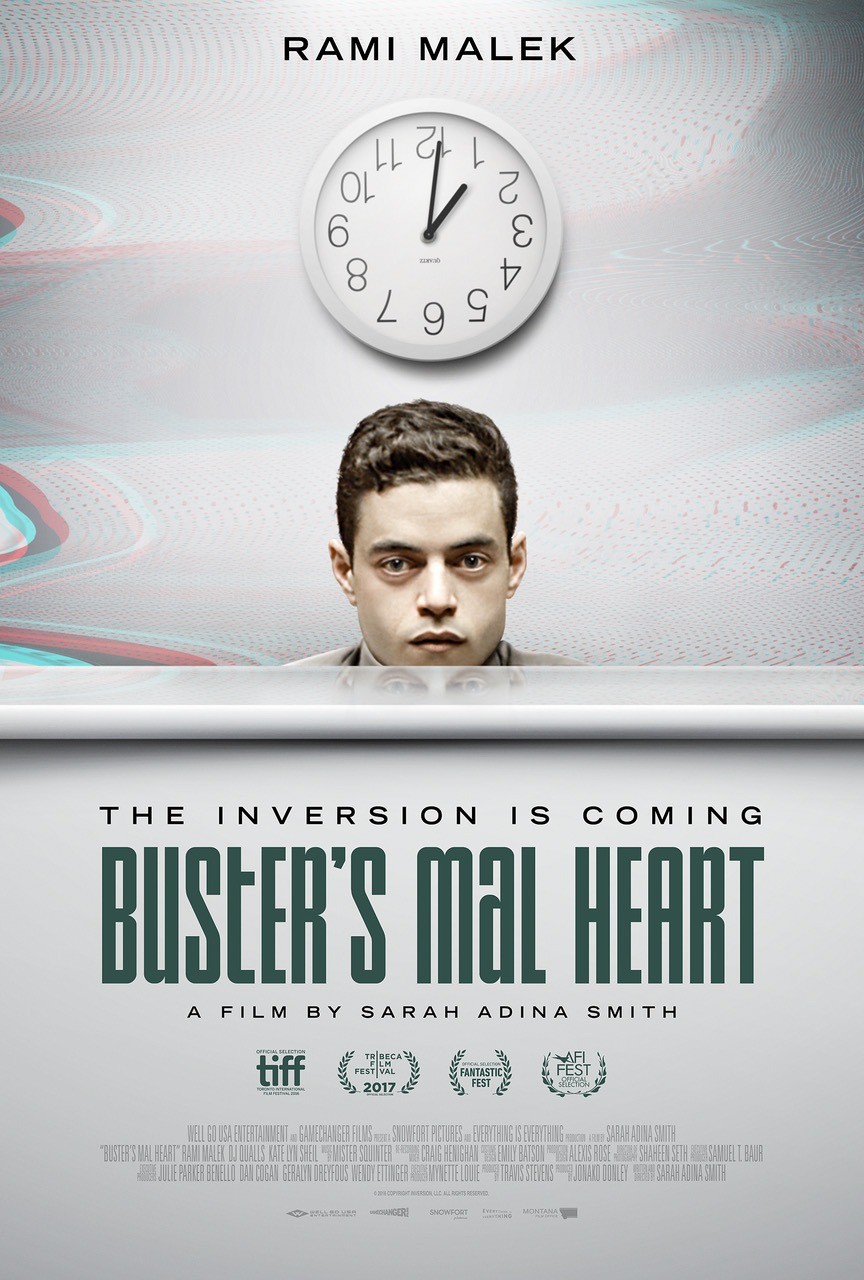 Director Sarah Adina-Smith’s mixed genre film infuses elements of psychological thriller, drama and dark comedy into her sophomore work, Buster’s Mal Heart. Intersecting vignettes from distinct timelines, we are introduced to Jonah (Rami Malek), a family man to Marty (Kate Lyn Sheil) and their young daughter, Roxy. Working night shift at a hotel as a concierge, Jonah is more often than not thoroughly exhausted and frustrated. Constant conflict with his in-laws and his demeaning boss converge and his relentless desire to purchase a plot of land and live outside of civilization is cut short by Marty’s rationale, knowing that they are far from being able to afford their own property and instead putting their daughter’s needs first. One night during his shift he meets an unnamed man (DJ Qualls), who delves directly into conspiracy theories and how we’re all a slave to the system. Initially finding himself hesitant towards the man’s rambles, his mysterious stranger quickly embeds himself further into Jonah’s life. In a separate timeline we are also introduced to Buster, a Jonah look-alike albeit more crazed-looking with copious amounts of facial hair, who breaks into lavish homes while their owners are away on vacation and dials into radio stations rambling about Y2K and the end of society. Adina-Smith’s film is a curious and interesting take on the mental breakdown of a man feeling trapped in current society’s rules, yet some of its ideas get caught in murky limbo and remain in vague territory.

The environment in which Buster’s Mal Heart is set in succeeds in creating a physically and mentally claustrophobic atmosphere. After Jonah’s boss suggests his family takes a “staycation”, in which his wife and daughter are brought to stay at the hotel with him, his familial life begins to emanate his work’s stifling aura and isolation. As the film reaches its climax it becomes unclear how much of the plot is based in reality and how much is in Jonah’s head. At one point Jonah loses his cool in front of his wife, breaking down and throwing kitchenware across the room but quickly collects himself and apologizes about that side of his temperament. Repeated incidents of symbolically splitting himself in two spread throughout the course of the film, as if to ask how an individual is meant to balance their place in society with their urge for pure freedom. Religious undertones permeate the film in the form of outdated programs and ads flickering on TV channels, his wife’s newfound religious identity, as well as frogs accompanying Jonah/Buster when he is out at sea. Quickly devouring the amphibians as his only source of food, the frogs also serve as a flashback to his young daughter and her fulfillment of playing with a plastic toy frog in her body of water (the bathtub). Adina-Smith’s indie is certainly a refreshing welcome amidst the torrent of spoon-fed films, however its cinematic experience and after thought leaves some threads a little hazy and indefinitely hanging.