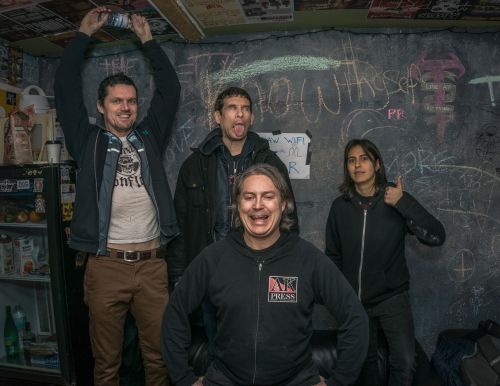 Renowned long-running Canadian punk rock band Propagandhi returns with its next album, the first full-length since 2012’s Failed States.  Titled Victory Lap, the LP will be out on September 29th via Epitaph.

Propagandhi formed back in 1986 in Manitoba, Canada and the band members have always blasted out an emphatic anti-fascist message through their music.  Their activism and passion are needed now more than ever, especially in the US which is suffering under the current divisive and destructive president and his administration.

Victory Lap features new guitarist Sulynn Hago, along with frontman Chris Hannah, bassist Todd Kowalski, and drummer Jord Samolesky.  Progagandhi kicks off a fall tour on October 10th in London and will make a run through Canada and much of the US.

The band has unveiled a video for the single “Failed Imagineer” and it showcases the guys performing live, full of intensity and dynamism.  The video footage is overlaid with the song’s lyrics written in cursive (Is that taught in school anymore?).