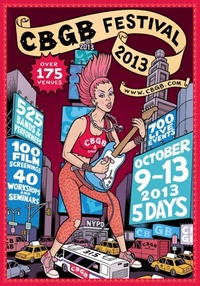 For four decades, the name CBGB has been synonymous with all musical genres emerging from the indie and punk underground. This year, CBGB will be breaking more new ground with the expansion of the CBGB MUSIC & FILM FESTIVAL, a five-day festival/conference. This will take place Wednesday, October 9 to Sunday, October 13, 2013 within NYC’s rich and varied music venues throughout Manhattan and Brooklyn. The Landmark Sunshine Theater on E. Houston St. will serve as the conference and film festival hub.

Named for the legendary club CBGB that was the birthplace of American indie, punk and new music, the CBGB Festival will be NYC's largest ever showcase of music, film, art, social awareness, entertainment industry workshops and conferences.

“CBGB has always been about live music,” says CBGB Co-Owner Tim Hayes. “A large music festival is the best way to bring musicians, film makers, entertainment industry professionals and fans together for five days in NYC.” The First Annual CBGB Festival hosted hundreds of events in venues that ranged from hidden clubs and neighborhood theatres to free concerts in Times Square and Central Park. By the end of the week, the 1st Annual CBGB Festival had entertained and engaged more than 300,000 music fans. This year’s incarnation offers a mixture of music from 700 emerging and established artists at over 175 participating venues in Manhattan and Brooklyn.

The CBGB Film Festival will premier an estimated 40 new movie titles with most featuring Q&A sessions with directors, producers and/or actors. “The CBGB Film Festival is positioned to be the leading rock and roll film festival in the country,” adds CBGB Co-Owner Joe D’Urso. “We will have approximately 40 movie premieres and 100 screenings. No other major film festival in the country focuses exclusively on music-themed movies on this scale. There is a ton of great music films out there and the field is really exploding right now.”

Richie Ramone Solo Album On The Way From DC-Jam Records