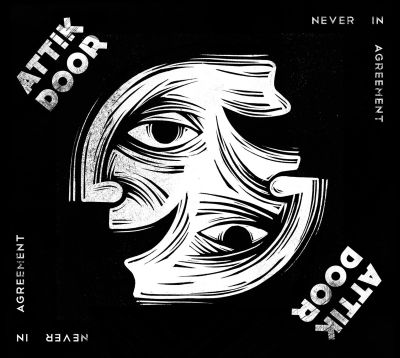 Short, but informative Reviews of Albums from Attik Door, i am Love, Atari Teenage Riot, and Return For Refund.

Crack open this Attik Door to explore roaring alt-rock/hard rock tunes fronted by a female singer with attitude to spare.  The San Francisco- (by way of the former USSR) based quintet deliver gritty rock songs that stylistically span the 70s and the 90s to present day.  Most of the album deals in pumped up rock numbers with aggressive, distorted guitar riffs (courtesy of band founder Alex Shrayber and Tim Shulepov), bass line menace (from Rita Grabarova), a churning slammed-drums tempo (by Igor Boyko), and expressively exclaimed vocals from Liana Tovmasyan.  While the alt-rock tracks are individually engaging, listening to the whole album in one sitting is draining and it’s the more reflective to pop-oriented songs/segments that stand out.  Take the melodic verses of  “California”, an eye of calm within the alt-rock tempest – Mellifluous guitars lilt amid a softer drum beat and gentle cymbal crash before the amped up chorus parts kick in.  “Posers” and “Moody” are both catchy tunes and the latter shines brightly with a cantering pace and a cavalier Liana breezily singing in a rich, throaty warble, squeezing and twisting her words out like Gwen Stefani.

The Philadelphia-native, Orlando-transplanted band led by Joshua Christopher (vocalist, guitars, zither) is releasing its self-titled album right around Valentine’s Day, but it’s not a platter to spin for your sweetie if (s)he’s into traditional romantic tunes.  What can be found here is progressive alt-folk/psych-rock with a theatrical flair and an eclectic and exciting mix of instruments including sax, cello, zither, and woodwinds.  The band, which used to boast over 7 members, is composed these days of Joshua, Will Whitmire (bass, banjo), and Kris Jackson (percussion, keyboards, vocals).  Joshua is always expanding his musical palette and on this album he blends classic(al) instruments with skewed rock/pop structures and malleable, dramatic vocals.  The result is hit or not-quite-a-hit, with the brisk, upbeat songs/segments and the moodily brooding bits being the highlights.

Joshua takes on different vocal styles depending on the tune, and his high register and low ‘n’ deep tones are both effective.  The upbeat album lead-off “Pillar of Salt” enchants with Joshua’s yearning falsetto, the pull of saxophone notes, and zither zings. The chorus of the Nick Cave-infused number “Ghost In the Hallway” is arresting as Joshua exclaims “You can burn in hell” against fiery guitar licks.  He moans through “Pants On Fire” amid delicately chiming keyboard notes and squelchy pysch-guitar lines.  And who can resist the silly fun of the banjo-pickin’ number “Stinkbug Serenade” about the ubiquitous, but harmless (To humans, that is; not crops.) insect?

Sensational and confrontational Alec Empire, Nic Endo, and new recruit Rowdy Superstar are back on the attack as the extreme digital-punk provocateurs Atari Teenage Riot, making mincemeat out of techno beats, incendiary rock guitars, and industrial noise.  “Reset” has been out on the band’s label, Digital Hardcore, since last year, but it remains a timely reminder that the more things change in society, the more they stay the same.  Atari Teenage Riot burst onto the scene in the mid-90s, with Alec railing against governmental oppression and exhorting the rights of the individual - and 20 years later he’s shouting the still-relevant message, questioning the status quo and protesting against injustice in various forms (Governmental control and cyber culture being the main themes.).   Most of the songs on the album are comprised of inciting and exciting onslaughts of rapid-fire beats, super-distorted guitar grind, hyper-agitated arcade game/electronic blips and beeps, and the trio’s alternating exclamations.  The exhilarating/exhausting pace is switched up with calmer, but menacing lulls where Nic usually lends her cool, but sweeter vocals to the apocalyptic digital discord.

The Canadian trio from Toronto with the self-deprecating band name has crafted a solid 6-song EP of blue-collar, Southern-style alt-rock songs.  The sonically-roiling, story-telling songs are lyrics-centered, mainly about relationships and self-worth, and sung by Drew Clementino in a clear, plaintive tone.  The production is clean and filled with growling, proficient guitar lines from Sasha Molotkow and crisp, kinetic drumming from Karlis Hawkins.  Positive messages power the EP, from the uplift of “Seize the day and change your life” on the grunge- flavored “The Fields” (replete with a ripping guitar solo) to “Live your life for you” on the alt-rock/punk hybrid “Yolo”.  “Yolo” is a standout for its thrashing guitars and warp-speed drumbeat on the flash chorus, as well as Drew’s angsty vocals that channel Kurt Cobain’s raw, pained tone.  The low-slung guitar riffs, measured, yet quick drum pace, and loose cymbal shimmer on “Between My Sheets” also attract interest.