Flash Music Reviews for May 2016 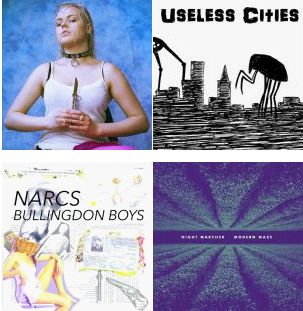 Rein – “I Don’t Get Anything But Shit From You”

Striking, Swedish electro-punk upstart Rein (AKA Joanna Reinikainen) rages against crappy relationships on her ferocious new single “I Don’t Get Anything But Shit From You”.  Rein released her debut self-titled EP this past January and has a full slate of performance dates this summer and through the fall.

The aggressive, but propulsive electro-punk barrage on “I Don’t Get Anything But Shit From You” pales in comparison to Rein’s vividly raw, shouted out vocals that are echoed and layered at times for maximum effect.  Rein harshly rants through the self-explanatory song title, then switches to a reflective tone on a melodic break in the track where brightly percolating electronic notes accent her blunt words, “I had enough / Why you keep hurting me? / Letting you go / sets me free.”  This is unvarnished, violent vehemence – and it’s exhilaratingly riveting.

Useless Cities – “To Be Ruined”

Newly minted, London-based alternative rock band Useless Cities (Tom on vocals/guitar, Clare on bass, Conny on vocals/keyboards, and Sebs on drums) mixes the bleak noir of the post-punk aesthetic with the expansive atmosphere of post-rock on the restless and intriguing single “To Be Ruined” off of recent debut EP, Stay.

The song warms up slowly at first, swimming in fluidly reverberating guitar, fast-tapped cymbals, an occasionally pouncing bass line, and long stretches of wordless male and female vocals.  The unexpected, but engaging accent of delicately tinkling piano notes materializes, along with a steady build up in intensity.

Then quite suddenly, the sonics kick into high gear with a pronounced drum beat, insistent piano refrain, bass line grind, blazing guitar distortion, and urgently proclaimed male and female vocals where Tom sings in a grimly sonorous tone, “I know it’s a car crash / but it’s my car crash.”

Leeds, U.K. alternative rock 4-piece Narcs is letting the secret out about its furiously powerful sound and vision, pulling the alarm on hot topic issues like politics, class inequality, and the stagnant status quo.  The band members take aim at the ‘Boys Club’ atmosphere entrenched in England’s elected officials and institutions on “Bullingdon Boys”, slowly, but emphatically building to a rousing chorus with the lead singer raging against the machine in fine style.  Narcs’ sophomore album, A Thinking Animal, will be unleashed July 8th on Clue Records.

Night Marcher leads the listener through the Modern Maze of current society and past experience, touching upon the “Scars” and “Mistakes” that make up a life, with the aim of improving in the future.  Rob Reinfurt is the man behind the moniker and he knows what he’s talking about, having been down self-destructive paths in the past.  He has now rediscovered his passion for music and created his album Modern Maze as a way to grapple with, own up to, and vanquish the tumultuous past – or at least move forward from it.

On the simmering blues-rocker “Shoved” Reinfurt spins an embattled family (real life) tale that ends with the chorus refrain of, “Everybody’s pushin’ / Nobody want to be shoved.”  Dynamic drum work, shimmering cymbals, and slide and electric guitar lines intensify by the end of the track with Reinfurt singing a soulful, bluesy style.

Save L.A. music venue The Smell from Demolition

FAITH NO MORE REISSUE LANDMARK DEBUT ALBUM, WE CARE A LOT, ON AUG. 19 VIA KOOLARROW RECORDS