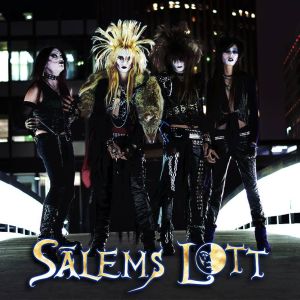 Extreme metal is back on the attack in the shape of the visually eye-popping, aurally heart-stopping thrash metal/shock metal outfit Salems Lott.  Looking like a wild stylistic hybrid of Japanese visual kei and Sigue Sigue Sputnik circa 1986 and putting on outrageously theatrical stage shows, the guys in the band risk narrow-minded ridicule and dismissal from those who can’t see past the piled on face paint, mile-high hair, and glam-trash threads.  These non-listeners are losing out, however, because Salems Lott is full of wickedly rockin’ sonic win.

Salems Lott is no parody band, but a shock metal act with serious instrumental chops.  Like a classical music prodigy at the piano, Monroe and Jett Black blaze through virtuoso guitar notes with aggressive aplomb.  Monroe also focuses on lead vocals, sounding like a vicious Tom Kiefer mixed with some evil Ozzy, among other throat-rippers, while Kay plays a mean bass and Tony F. Corpse batters the drumkit into oblivion.  Sure, maybe the lyrics aren’t totally da bomb, but complex wordsmithing is usually not the target of the metal genre in general.  So get swept away by the ultra speedy pace that races along with a rapid-fire artillery barrage - I mean, drum beat, incandescently incinerating guitar riffage, scuzzily growled ‘n’ screamed out vocals, chanting back-up shouts, and the requisite, but spectacular guitar solo fireworks.  Light it up!

If you want your metal shorn and unadorned (unlike the aforementioned band above), but packed with heavy inner contemplation, look no further than the San Francisco-located instrumental post-metal duo Niō.  Davide Tiso (guitar) and Jef Pauly (drums) have recently released their debut self-titled EP, but they are no strangers to the metal world, with Davide having played in Ephel Duath and Gospel of the Witches and Jef having played in New Diplomat and Vela Eyes.

“Grey Healer” is the first single off the 5-track EP and is a slow-burner that alternately heats up and cools off as it continues, with the guitar notes from Davide flowing fluidly, but ominously, with a slightly distorted edge amid the measured, structured, but emphatic drum work and sporadic cymbal bash from Jef.  The cycling guitar line and drum hits never fail to captivate, drawing the listener in closely to their well-timed and executed interplay.  Mid-song the guitar growls die down to a minimum and the cymbal smash lessens to the point that a ticking beat can be heard – and then suddenly the guitar swells forward like a restless, jagged tide mirrored by the surge of prominent drum beats and scintillating cymbal hits.  Riveting in a reflective way.

The Canadian alt-rock band We Are Ardent will be releasing its 2nd EP, Bright Shadows From Dark Lights, on November 20th and it overflows with a dynamic, robust rock sound that is given an unusual twist with the occasional inclusion of the kalimba instrument and both male and female vocals.  Brothers Josh (guitar, vocals) and Justin (drums) Brazeau, Kat Kerley (vocals, kalimba), and Matt Dalton (bass) were nominated for 3 Niagara Music Awards in 2014 and they ably show that rugged, affective rock with insightful lyrics is alive and kickin’ long after the 1990s heavy alt-rock explosion.  The band members delve into personal, but universal, issues on their latest EP, like being bullied early in life and they convey a perceptive and inclusive view with their lyrics.

On the stirring single “Low”, prime distorted guitar lines are joined by bass line rumble, a sharp drum beat, and the tick of cymbals.  Josh emotes on the short-phrase verses from the get-go, shadowed sweetly by Kat.  Josh’s voice swells with pained, rough exclamations on the chorus sections as he reveals “I feel low sometimes.”, as we all do at some point or another, while Kat, in a rich, Shirley Manson-like tone, counterbalances his angst with the comforting lines “That’s alright / You’ll be fine.”  The lyrics may be spare in their simplicity, but they are full of heart and hope – just like We Are Ardent.

Alternative pop/rock singer-songwriter Matt Lande grew up in Florida, hit the road as a guitarist in the band StorySide: B, moved to L.A. and released an EP under the name Heaven Is Where, and then decided to keep it real and use his own name to release his material.  In 2012 he released the album Welcome Home Child as well as the acoustic EP DarkStar.  Continually pushing himself to get his work heard and to make his mark, Matt has placed and toured his music and been a background actor on several TV shows including Grimm and The Librarian.  His upcoming album Glow, to be released on December 1st, should definitely get him more notice as it contains a carefully crafted batch of deeply emotive songs that were influenced by the recent passing away of two of Matt’s close friends.

Sweeping lead single “Spin” at first seems like a tribute to someone who has been lost due to its lyrics like “Heaven lifts her off the ground.” and “Angels carry us now.”, but then the realization hits that this a love song as Matt sings “Passion flowing / Touching makes us move.”  Amid a strong, flat-smacked beat, whirling (electric and acoustic) guitar strokes, and shimmering shaken sounds, Matt emotive vocals vibrate with a soft warmth.  His smoothly yearning tone is supported by uplifting violin pulls on the verses and, near the end of the song, brief strums of acoustic guitar.

The Rock ‘N’ Roll Flea Market At The Regent