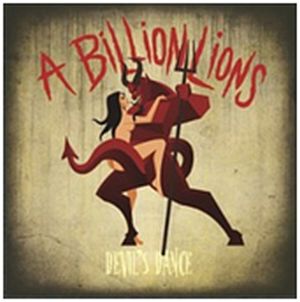 There’s an irrepressible and exhilarating energy that runs through “Devil’s Dance” as the band crank it up to 11 at times, especially near the end of the song during the blazing and intricate, heavy metal-inspired fretwork pyrotechnics.  Phil and Joe alternate vocals on the verses and choruses, respectively, with Phil wailing out a modern blues-rock lament (hence the Jack White reference) of “Standing in the desert / Left it all behind / with only whiskey to ease my mind.”  On the chorus Joe counters Phil’s desperation, roaring out the lyrics “What are you so scared for… / What did you come here for…?”  Ryan and Matt lay down an intense and changeable rhythm section for Joe and Phil to work off of on guitar fireworks and exclaimed vocals (therefore the remark about Blood Red Shoes).  The band leaves space for a varied pace so as not to incessantly clobber the listener, but rather keep him/her engaged, including slots to showcase Ryan on bounding bass and Matt on pummeled drums before the band achieves lift-off towards metal-bound glory.


The Black Sparrows – “The Queens Head”

London-bred ‘punk ‘n’ roll’ upstarts The Black Sparrows distill the best of The Libertines and Suede, pouring a brash ‘n’ rousing brew of gritty, but sharply focused indie rock tunes that foam over with restless punk rock energy and top pop exuberance.  The bright young lads (Dan on vocals and guitar, Tom on guitar, Rob on bass, and Kai on drums) radiate a quintessentially disarming British charm and desperately enthusiastic energy as they swing for the fences time and again on Tiskie Tapes, their debut album to be released November 27th on Cariad Records.

A shining example of The Black Sparrows’ sound can be found on “The Queens Head”, a deliciously brisk and unabashed ode to pub life.  While similarities to The Libertines abound, The Black Sparrows don’t come off louche and dissipated like Pete Doherty and company.  The members of The Black Sparrows are instrumentally tight and eager to do right by their tunes, with Dan enunciating excitably, with the gleam of a young Brett Anderson in his vocal delivery, “…have a few / Sit down where you belong.” while the speedily strummed acoustic guitars, grimy rock guitar riffs, and kinetic drum beat whirl around him.  You can almost see the splashed lager on the chorus sing-along of “Take me down to the Queens!”  Dan wraps it up in a nutshell near the end of the tune, tumbling out the super-keen lines with “Looking sharp, mate / looking ace / but once again it’s 5AM / Another evening wasted in this place / I’m off my face!”  There’s not a wasted moment on “The Queens Head” or any of the other songs off The Black Sparrows’ Tiskie Tapes. Drink up – and listen up!

Debris of Titan – “What’s In My Cocoon”

Debris of Titan is made up of two childhood friends and now college-entangled guys from Newburgh, New York, the space-age named Nova (born Winston I. Dunlop III) and the craftily monikered Fox (nee Michael Diaz).  The duo is set to drop its 6-song, mellowed-out psychedelic album, On The Home Slope, on October 23rd.  Of the 6 songs, three run only a brief two minutes or less, giving the album an EP feel rather than a full-length platter.  The duo’s tunes are influenced by and meld psych, pop, rock, folk, and hip-hop vibes into dreamy, groovy, and elevated Surround Sound-like creations.

One of the tastiest bites on the album is the vocally super-laid-back “What’s In My Cocoon”.  A starry sprinkle, subdued strokes of guitar, and high plinks of piano notes starts it off until Nova and Fox come in with a saturated and echoed vocal sound, layering and harmonizing their voices in a sharp, but still blissful tone.  The drums kick in with a trippingly fast beat and are accompanied by equally quick cymbal crash and lower, bass line-type reverberations.  This mix is contrasted by a slower drift of exclamatory “Ohhhs”, bright guitar chime, and a bevy of squiggly, fluttering, and sparkling electronic notes.  The lyrics are a bit of a downer compared to the buoyant expansiveness of the sonics, as Nova and Fox moon moodily, if maybe a tad too simplistically, “What have I got to do / the day blue, my mind grey…”  I guess that’s college life for ya!

Space Apaches – “I Am The Six O Clock News”

Ashville, North Carolina-located, psych-rock/country-rock outfit Space Apaches has an impending release on its hands with its Smokin’ Voyages full-length scheduled to drop on October 9th on the unique label Artists International.  The album was recorded at Sedgwick Studios, a state-of-the-art production complex created by Artists International and surrounded by a wilderness environment.  Smokin’ Voyages will be available for purchase from all the usual outlets, but will also be released in a “Health-Science Enhanced” version.  For those that are scratching their heads right now, the HEV format has to do with regulating the firing of neurons in the brain, thereby modifying a person’s mood.  HEV was used in the recording of Smokin’ Voyages and is also part of the good-humored band’s live show.

The core of Space Apaches is made up of Tom Leiner (guitar), Andrew Reed (guitar), Aaron Price (keyboards, piano, guitar), Rob Geisler (bass), and Jim Arrendell (drums) with collaborating artists joining in on occasion.  While most of the 14 tunes on Smokin’ Voyages are structured and performed in an upbeat, light-hearted rock style, a few of the tracks contain more trenchant lyrics and urgent vocals including “I Am The Six O Clock News.”  On this song, the lead singer deplores the violence, poverty, and destruction found on the major TV channel newscasts as he figuratively walks in the shoes of a photographer who has to travel around and snap images of “burning houses” and the “flash of guns”.  He questions imploringly in a gritty vocal tone “What can I do?” amid the start-stop grind of distorted guitars and a steady drum beat.