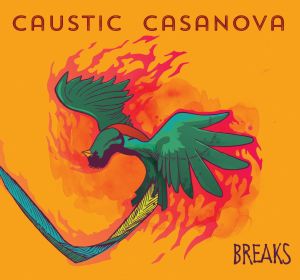 The members of self-described ‘eclectic heavy space-rock’ band Caustic Casanova hail from Washington, DC and already have 2 albums under their collective belt, the well-over-1-hour debut opus Imminent Eminence from 2008 and 2012’s Someday You Will Be Proven Correct.  Both of those albums were under the influence of core members Stefanie Zaenker (dums, vocals) and Francis Beringer (bass, lead vocals) and the band’s original guitarist Michael Wollitz, who broke away from Caustic Casanova in 2012.  Andrew Yonki has since come on board on guitar and the solidified trio is releasing its newest album, Breaks, September 25th on the Kylesa-run label Retro Futurist Records.

Three cuts from Breaks have been released so far, with lead single “Show Some Shame” showcasing Caustic Casanova’s heavy power and melody.  It’s a more straightforward tune than the other singles, charging ahead with whipping, incendiary guitar riffs, nimble, low-end bass line, and an emphatic, acrobatic drum beat.  The song plows forward with Francis’s expressive vocals marking the verses, as he plaintively howls “All the world’s a stage / We’re unprepared / Our understudy’s turned up dead.”  For the chorus breakdown, Stefanie joins Francis on their Exene Cervenka and John Doe-like exclamations which are pitted against the heavy churn of distorted guitar riffs, cymbal blasts, and drums that pummel like a sped-up boxer hitting with sharp precision.  The agitation only increases by the end of the song, with both Francis howling and Stefanie shouting “We are doomed!”

“Blame” displays all of the above, opening harshly with jagged guitar riffs and then alternating roared out vocals with a husky, but more mellifluous tone on the intro lines “I’m falling apart / This addiction takes its toll…” and “Like a drug / I just can’t quit…” The 2-sided vocal approach is compelling as John slides into a plaintive tone on the chorus, declaring “… a sickness lives in me / and you’re the one to blame.”  He then morphs into a scouring growl (or is it an assist from Mike on back-up vocals?), unleashing the lyrics “Here it comes again / The cycle never ends.”  This song may be about love (or lust), and if so, it sounds like a pretty scary and out of control place to be!

The electro-pop noir duo of Chris Wirsig (songwriter, producer) and Cynthia Wechselberger (vocalist) is based in San Francisco and recent EP Ghosts of the West Coast is steeped in the dark side of the California sunshine.  The 4 tracks are covers of California-related songs and each one is a collaboration between no:carrier and a different guest artist.  Don Henley’s classic “The Boys of Summer” is covered by Kalib DuArte, Belinda Carlisle’s “California” is powerfully touched by the vocals of Melissa Harding, and Cynthia herself graces the traditional Irish tune “She Moved Through the Fair”.  Rounding out the quartet is Lauralee Brown, tackling lost dreams and homelessness on Tony Carey’s “Room With A View”.

The mood is foreboding from the start with darkly looming and flitting electronic noises that then make way for contemplative piano notes, a gritty, measured beat, and Lauralee’s androgynous, sing-talking vocals that are tinted with a slight echo.  She dives into the storytelling song, drawing out the words with portent, intoning omnisciently that “He used to be a leader / when he had someone to lead.”  Lauralee glides languorously through parts of her vocal delivery, imparting a dreamier vibe to the proceedings, before hitting home with the final lines “He was living in a castle / that he build with his own hands / out of newspaper and cardboard…”

The Sunless Sea is actually the music project of one Charleston, South Carolina-based Witte Crosby who blends strident, emo indie rock vocals and song structures with smoother electro-pop melodies and instrumentation.  He released his 6-track EP No Ghosts in late spring and it’s rife with rocky, off-kilter tunes that take a while to warm up to.  The EP’s closer, “XO”, is the closest Witte comes to a traditional alt-folk format with acoustic guitar strum, contemplative piano notes, and more subdued vocals.  Otherwise, the electro-rock atmosphere is driven by Witte’s urgent, emo-whining tone that will either attract or repel the listener.

A little of Witte’s vocals go a long way, and along with the ending tune, the penultimate “Void” also gives listeners a more hushed take on his vox.  On the slower-tempo “Void” a steady drum beat marches on with plucked guitar and synth organ notes, a clapping beat, and sporadic electronic squiggles.  Witte sing-talks in a softer tone about being the satellite around someone’s city as Witte is shadowed by a deeper, distorted male voice.  A gritty, searing guitar line rings out amid the somber mood while Witte is backed by light ‘n’ sweet female vocals and extended synth lines.  By the end of the song, a contained guitar motif plays out with Witte plaintively admitting that “I know I was wrong / I never meant to send you home.”

Video: New Video from ‘Microwave’ for ‘but not often’