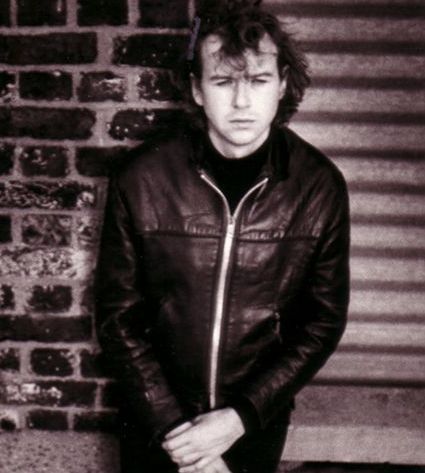 Ian Lowery is best known in the musical world as the founder of the 1980s post-punk band Folk Devils.  The artist, who sadly passed away in 2001, had a rich musical career that spanned his whole life.

The multi-talented Lowery was a singer, songwriter, musician, and producer.  He was born in County Durham in North East England in 1956.  He first made a mark with the punk rock band The Wall, whose debut single “New Way” was released in 1979 via Small Wonder.  Legend John Peel played the record on his radio show and that began a strong connection that would last through Lowery’s next two bands.

The Wall’s second single, “Kiss the Mirror”/”Exchange”, had the distinction of being the first record to be produced by ex-Sex Pistols member Steve Jones.  After Lowery left The Wall, he forged ahead and formed the new group Ski Patrol, which signed to Killing Joke’s Malicious Damage label.  Ski Patrol released four singles between 1980 and 1982, including the darkly atmospheric “Agent Orange”.  The act was invited on John Peel’s radio show and performed a couple of sessions.

Lowery’s next venture was the influential Folk Devils, which he started up in 1984.  The post-punk band was critically acclaimed and highly successful, releasing several singles (including the epic “Hank Turns Blue”), a couple of EPs, and the classic album Goodnight Irony.  Unfailingly championed by revered tastemaker John Peel, Folk Devils ended up playing three Peel Sessions.

Changes to the band resulted in Lowery going his own way and signing as a solo artist to Situation Two/Beggars Banquet.  Lowery was labeled as a solo creative, but he worked in collaboration with other musicians.  He kicked off another lauded band named King Blank and released lead single “Mouthoff” with Screaming Blue Messiahs.  The track hit number one on the CMJ Import charts.  The album Real Dirt followed and further showcased Lowery’s solid position in the UK, European, and US music markets.

Lowery released his next album for Situation Two/Beggars Banquet as The Ian Lowery Group.  The ironically titled King Blank To was well-received in Europe and the US.  By 1993, Lowery had moved to Edinburgh, Scotland where he formed the outfit Drug Of Choice, dropping the album Cooler that same year.

Lowery continued to make music from that point on, forming other bands and contributing to various collaborations until his premature death in 2001.  Recent retrospective compilations on Ski Patrol and Folk Devils that include the hits and demo recordings, as well as the inclusion of “Beautiful Monster” on Cherry Red Records’ Silhouettes & Statues: A Gothic Revolution 1978 -1986 box set, have proven Lowery’s influence and creativity.

In 2014, Spectacle Music Ltd released the highly acclaimed Get Out The Sun and Ironic, two compilation albums that catalog Lowery’s previously unreleased compositions in the last decade of his life.  The music is raw, emotional, and hard-hitting.  Moving from the driving, perceptive “Cheating Time” to the timeless and bleakly reflective “The Crutch That Cripples Me”, Lowery’s songs – his potent words, his songcraft, his intensity – are a stark reminder of a great talent lost.

As the renowned Mick Mercer puts it, “I…can’t help wondering what the old bastard would be coming up with now, had he lived?  Better than the slop being churned out by people half his age, that’s for sure.  The more you hear him, the more you miss him, and that’s how it should be.”

Get Out The Sun and Ironic are available in vinyl, CD, and download formats at Amazon and iTunes.  Information on these two albums can be found at Discogs.