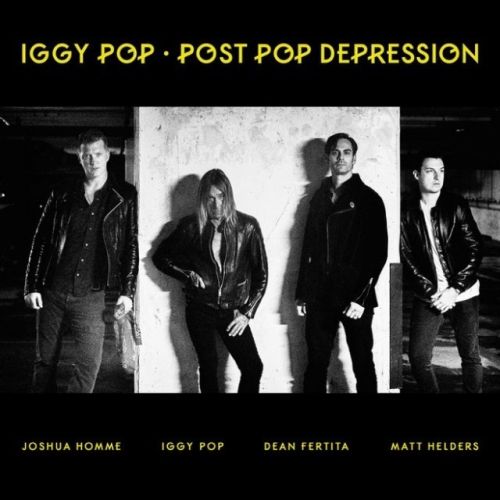 The legendary Iggy Pop and Josh Homme of QOTSA and EODM unite in a surprise musical collaboration.

The info below is gleaned from several news sources, including The New York Times, Rolling Stone, Noisey, SPIN, NME, and iTunes.  Here’s what is currently known:

1.  The unexpected and secretive collaboration between the legendary Iggy Pop, the super-talented Josh Homme, and other musicians has yielded not only life-long friendships (one would assume), but a new album to be released March 18th on Loma Vista in the US and Caroline International in the UK.

2.  The album is titled Post Pop Depression and it’s by Iggy Pop.  For fans of Pop and Homme, it’s more like elation!

5.  It was Pop who contacted Homme via email and suggested getting together and writing something - an offer Homme couldn’t - and wouldn’t - refuse.

6.  The 9 songs that comprise the album were recorded at Homme’s two studios (his home base in Joshua Tree and Pink Duck in California) with Dean Fertita (Queens Of The Stone Age, Dead Weather) on guitars and keyboards and Matt Helders (Arctic Monkeys) on drums.

8.  A North American and European tour kicks off March 15th.  Check this link for details.

11.  The audio for third single “Sunday” was unveiled at YouTube.

13.  Post Pop Depression is Pop’s 17th studio album and latest record since his work with the Stooges on 2013’s Ready To Die.