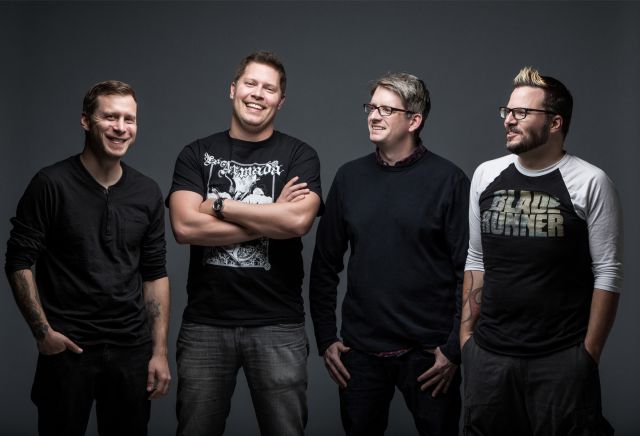 Steve of renowned punk band Belvedere talks about their reformation, energetic and melodic new album, highlights from the past, and what to expect in the future.

Heya Steve!  It’s so great to touch base with you about your new album, The Revenge of the Fifth, to see what you’ve been up to since the band’s break-up in 2005, your reunion in 2011, and now.  It’s such great good fortune that you got back together as a band – and have delivered a powerful, speedy, and insightful new album 12 years after your previous release.  What has the reception for The Revenge of the Fifth been like?

Thanks for saying that.  It’s been overwhelmingly positive since we first mentioned that we were going to put out a new record.  We’re actually a bit floored to see positive reviews of the album.  We’re certainly not used to it.

Before we dive into more details, who is currently in the band and what instruments do you play?

You released The Revenge of the Fifth on Bird Attack Records this past May 5th, fittingly, the day after ‘May the 4th (Be With You’).  Please tell me your album title is an intentional Star Wars-related play on words, or am I reading too much into that?  If it’s not, what is the meaning of the album’s title?

It is a bit of a Star Wars play on words.  A year ago on May 5th, Scott emailed me a 20 second riff he wrote that he called “Revenge of the 5th”.  That title never changed and I even wrote the lyrics around my interpretation of the song title.  The lyrics are about the 5th element (the human spirit).  Once it was time to come up with an album title, it was an obvious choice.

What are the main takeaway lyrical themes/messages on The Revenge of the Fifth?  Could you have written numbers like “Generation Debt” and the title song 15 to 20 years ago or has the passage of time and accumulation of life experience brought you to this point?

I don’t think I was the same person 20 years ago and definitely didn’t have the perspective I do now. The main theme of the album is as a species we need to do better; we need to have more compassion for each other.  You have one life to live; make it a positive one.

What would you say is the overriding difference between Belvedere of yore and Belvedere of today?  What life, and/or music, lessons have you absorbed that translated to your new album?

How positive the experience is now.  Writing and recording the album didn’t involve conflict between us.  We all said we wanted to make the best record possible without ego getting in the way. The tours we do are usually only 3 or 4 days.  We all look forward to them.  The other guys and I are more interested in the positive aspects of touring and spending time together as friends instead of focusing on petty arguments from the past.  Again, one life to live in a positive manner.

Did you have a pile of compositions and/or lyrics ready to go when you all entered the studio in 2014/2015 to record The Revenge of the Fifth?

We had already demoed almost the entire album.  Almost all of the songs had lyrics, phrasing, melody, and even harmonies.  When it was time to record, we then spent the majority of the time just getting the best performance.

What was it like to create a new Belvedere album after such a long break?

At first we didn’t know how it would go, but once we started demoing a few songs, it led into others.  Once we had 10 – 12 songs written, it was time to start booking studios.  Because of the positive nature of the writing and recording process and the great relationship we’ve built with Bird Attack Records, I can see us doing this again soon.

You had an awesome thing going since your inception in 1995, with a fervent fan base, critical accolades, playing prime gigs and fests like the Warped Tour, and touring around the world and with legends like Bad Religion, Rise Against, and Death By Stereo.  Why did the band split up at a time when the future was so bright you had to wear shades?

We were getting some great support tours at that time and getting some good crowds when we toured on our own, but there were still times when we struggled.  For many years we grinded it out on the road in front of barely anyone.  We had basically burned ourselves out being in a van with each other 200+ days a year.  The band took up our entire lives and we were all barely able to make rent.  It was clear at the end of 2004 that we needed to go our separate ways.  I always said that we should stop when it wasn’t fun anymore and that’s what happened.

As you mentioned, for several years before the band break-up, you stuck to a relentless touring schedule that took its toll.  When you look back now on it all, do the good/fun times outshine the bad/crazy experiences?  Can you spill any details about a standout incident that flashes through your mind when thinking about your gigs?

I can honestly barely remember many of the bad times.  I look back fondly on all the crazy, long tours we did.  These experiences made us who we are.  I know what it’s like to live on nothing for years and sleep on floors.  Now that I’m older I appreciate even the smallest conveniences and successes.

Were you all musically active in other ways during the period between 2005 and 2011?  Or did other obligations/priorities take over?

Everyone in the band played music in another band at some level. Graham and I toured in This Is a Standoff for 5 years and made 3 albums.  I think we made it to 35 countries in that time.  Jason and Scott stayed local and played in bands in Calgary as well.

When you reunited as Belvedere in 2011, what was your intention as a band?  Was the primary mission to record an album?  Or to perform live?  Or both?

We never thought an album would come up.  I wanted to play shows again and see what would happen.  I would have been happy with the dozen shows we booked, but the offers kept coming in.  We were having such a good time playing and eventually wanted to put out new music.

You did play a run of reunion shows in various countries in 2012.  What was that experience like on the whole?  Did you have any new material to perform at the time or were you blazing through your back catalog?

The experience was very positive.  The shows and festivals were also way bigger than we thought they would be. We had no new material at that point, so it was tunes from 1995-2005.

You do have a deep reservoir of songs to pull from over the course of your career.  Which one is your most fave and why?

“Brandy Wine” is a great song to play live.  It seems that our fans have taken a liking to that one.  Overall I’d say “Popular Inquiries” is a fun song to play.  It’s very challenging to play on the guitar while singing.  It’s still fun for me every time.

What’s your take on the state of punk music these days?  Are there any newer bands of note that you’ve noticed?  Or do you stick with the oldies, but goodies?

I like most of the bands in the genre.  People chose to make this music in a time when it’s not a popular genre of music to make.  I gravitate towards bands that create authentic music and lyrics and that’s probably why I’ve stuck with punk rock.  I’m a lifer.

While I still listen to all my old favourites, I think you need to go to Bird Attack Records to see all the new bands that are coming out.  Go check out Contra Code to see what I mean.

What’s next on your plate?

A small Europen tour at the end of June.  We’re meeting up with NOFX, Anti-Flag, and Pennywise on various dates; then a few small shows and festivals over the summer.

FAITH NO MORE REISSUE LANDMARK DEBUT ALBUM, WE CARE A LOT, ON AUG. 19 VIA KOOLARROW RECORDS