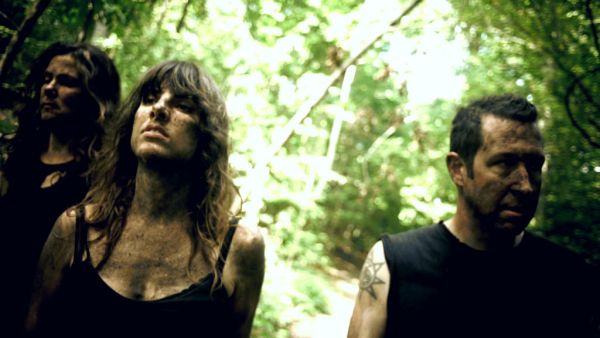 Castle Black – Photo courtesy of Behind the Curtains Media

Brooklyn-based indie alternative rock band Castle Black are on the musical attack on their potent new EP the gods that adored you, which alternates between dynamic, emotive rock and softer reflection, usually within the same song. Post-punk, indie rock, and alt-rock styles merge together on the EP, with perceptive and pointed lyrics and passionate vocals rising above it all.

Leigh Celent, founder, singer, and guitarist of Castle Black, graciously took some of time out of her super-busy schedule (A long tour is coming up in a few days!) to enthusiastically reply to some probing questions about the gods that adored you, the Brooklyn music scene, the state of the nation, and more.

Heya Leigh!  So cool to connect with you! Your new EP the gods that adored you just came out on June 29th.  What have preparations been like? What was the pre-release vibe like?

Great to connect with you too. And thank you for not capitalizing the title, that's been hard to enforce!

It's been hectic! Wed released the EP this past Friday, and are leaving for tour this week, so it's been a balance of juggling the EP work with the tour planning. We recorded in February, mixed in March, mastered in April. The artwork was done sometime in there (a super rad painting by our friend and artist Sgott Mackenzie), and I just got the CDs in time to mail some out to radio stations in advance of the release date. Behind the Curtains Media has been working on publicity for the album, which was a huge part of the preparations for the release as well. Last week was filled with last-minute preparations for our release show that was on the 28th, at The Well in Brooklyn.

The pre-release vibe has been really positive. We released "Sierra" as a single on June 15th, and we had some great press on the song already. We also had a pre-release review of the full album this week, which was also really complimentary, so we're happy that the album seems to be resonating with people even before its official release.

the gods that adored you is a hard-hitting, but tuneful with special emphasis on the lyrics, with a Part A titled Fucked and a Part B named Adored.  What’s the meaning behind this?

Well, the title of the album, the gods that adored you, comes from a line from the fourth song on the album, "A Cigarette, Saved." The full line is "fucked over the gods that adored you." I saw the five songs making up this one concept, but in these two distinct parts, dealing with the ideas around what it means to be fucked or to be adored, or to be the person doing the fucking or the adoring. I love perspective, and I love perspective switches within songs, almost like a movie can do, so it's not one straight answer. Sonically, the songs in each part go with each other; the songs in Part A being more straight-forward, raw, and driving and the songs in Part B being a little more out there, more ethereal, and epic.

This is your fourth EP release in just a few years.  Why drop EPs and not a whole album?  Is a debut album in your plans?

I'll drop a full album if a label will fund it!  I mean, that's part of it.  Funding, and time. I've been trying to make the best decisions that I can within the constraints of funding and time. I'm simply doing too much right now and I can't realistically keep this up, or add to it much more.

That being said, I also think that while it would be nice to put out a whole album soon, there's validity to the fact that people's attention spans can be really short, and to try to remain relevant and active, I think it's good to release something a few times a year, so for us that has been an EP and then maybe a single or a video in between.  If we released a full length, I wouldn't want it to take away from being able to put stuff out there regularly, so if I had proper funding and time, well then I'd release a full album every year instead of an EP.  We are relatively unknown, so we don't have the luxury of taking years to make an album.  We need to be on people's minds.  LA Music Critic would agree with you though - They gave one of my favorite press comments from last year on our EP Trapped Under All You Know: "We only wish there were more than four songs to enjoy."

You describe your sound as post-punk grunge rock.  What your affinity to grunge?  Isn’t it a dirty word these days, or has it cleaned up nicely, like the now-lauded shoegaze style?

Well, we try not to label it too much, but the question is understandably asked and people like labels and genres. I tend to prefer post-punk because it just encompasses so much more. People call our music all sorts of things, from punk, to alternative, to post-punk, to grunge, to post-rock, etc.  I heard the term "punge" recently, so that's apparently now a thing.

I do and did like grunge music, as do members of my band. There are a lot of great grunge bands from the ‘90s. Is grunge a dirty word these days?  Maybe the word has cleaned up nicely either way, you hear a lot of bands kind of reviving the style, and grunge elements work well today when mixed with other styles, in my opinion. If any word should be a dirty word, it should be punge ... but I'm coming around to it the more I say it.

Speaking of a quasi-grunge connection, what do you make of your band’s music being compared to prime tunes by Hole?  Is this link strange or on-the-nose to you?

I loved that Indiemunity was so specific in that review where they compared us to Hole, they said "reminiscent of Hole's best songs."  That's just an amusing way to put it, and I believe that came from a genuine, well-thought out place, so I appreciated the comment very much. People like comparisons.  Hole was a great band, with some great songs, so I am flattered really that anyone would make the comparison.  Really, if anyone is going to make a comparison, and truly hears elements in our music that remind them of someone else, then I'm flattered they took the time to think about it.  What I'm not flattered by is rote comparisons to bands with no thought put into it; for example always comparing female-fronted bands to other female-fronted bands when there is no other commonality (and that of course does happen).

How has the Brooklyn music scene shaped or inspired you?

The Brooklyn music scene makes you work harder than you think you need to, because there are so many talented musicians here, and so many bands making great music. You have to really challenge yourself to stand out, and work hard to keep your audience, and to keep your relationship with other bands in the scene, because there is just so much happening on any given night of the week.

This question is sooo obvious, but in light of, ummm, “Jon Snow” and “Ygritte” marrying in Scotland over the weekend, I have to ask if your band name is a reference to Game of Thrones or if you really like dark, fancy architecture?

Like you mentioned, you have a summer tour kicking off imminently, with dates through early August.  Is this the longest tour you’ve done or have you been on the road since your inception in 2015?

This is the longest straight-through tour to date. Touring just came about naturally last year, as a logical next step to really get the music out there and be heard. We had been doing some shorter runs here and there since probably 2016, but I knew we had to step it up if we wanted to be more than a local band.  There is something extremely gratifying when you hear someone tell you why they came out to see you in a city where you don't live, or thank you for coming through their town. The response in so many places is really inspiring and motivational.

How are you dealing with the destruction of the nation under Trump and his followers? How do you stay positive and combat the relentless negativity?

Trump and his followers of course brings up the image of Voldemort and his Death Eaters, among others. I'm sad, really, there's no other good way to describe it, and combating those feelings on a daily basis is of course what so many people are going through, and it's hard. But we do have to stay positive and active and outspoken, for those whose lives he is destroying in a very real way, or for the planet and wildlife that he is destroying in a very real way. Children being taken from their parents, I mean, how are THEY supposed to deal with that type of destruction...? That's the real question and one we'll be dealing with for years to come.   How do we look back as a country and explain how our system allowed a man like this to be in power, when this has happened countless times in history?  What does that mean really, when no one learns, narcissists are in power… It's all just so heavy.

I think we are beyond staying positive perhaps, and it's about fighting back in whatever way we can.  Narcissists, sociopaths etc., Well, they don't change.  I don't know, in another life I think I would have made a great revolutionary.  But, in this one, I'm really trying to make our music matter, stand for something positive, express emotion freely, make someone feel less alone, speak up when I see something inappropriate happening, make choices with the environment in mind...

Individual efforts do matter in this day and age. We try to play as many benefit shows as we can, and take stands on social issues as best we can with the medium and the resources that we have. And this goes for both the musical and non-musical world, but now, more than ever, it's just so important to say something, if someone is being racist, or sexist, or whatever, you can't just sit idly by.  People need to be accountable for their thoughts and actions, and their part in this whole thing.