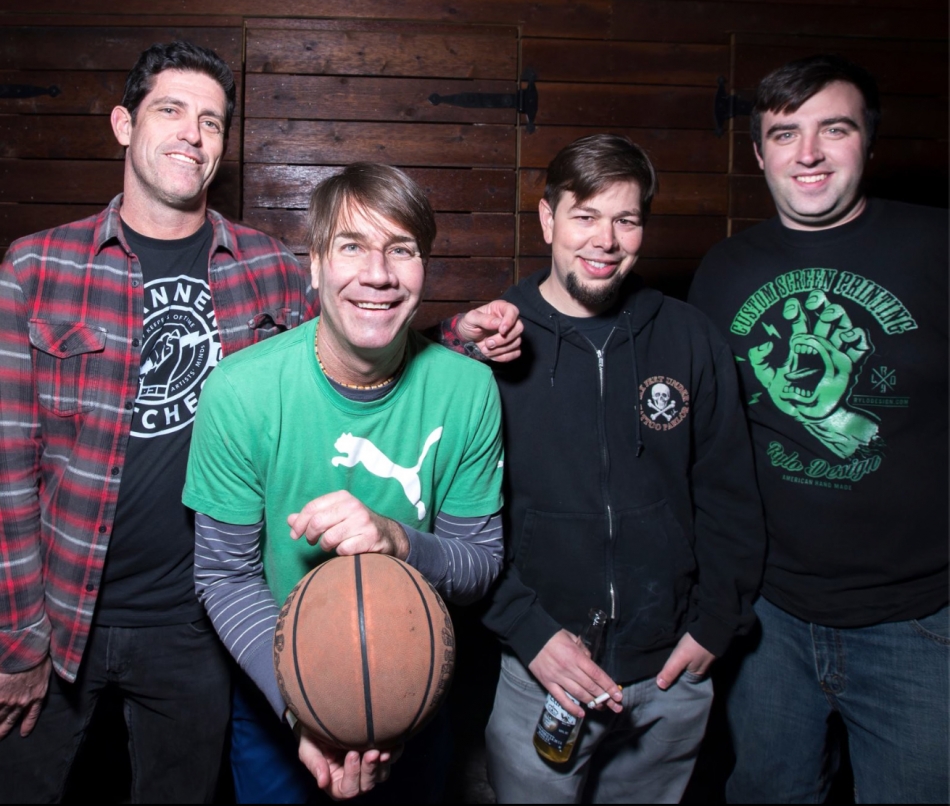 Confrontational punk band Guttermouth is back in the limelight with a raucous new EP after a 10 year wait for new material.

Heya guys!  It’s been a decade-long wait, but you’re finally releasing new Guttermouth material in the form of the Got It Made EP, which comes out July 22nd on Bird Attack Records/Rude Records.  That must be a huge feeling of relief to squeeze this out after so long!  Are the songs on the EP the result of fresh ideas, lyrics, and song-craft – or have you been holding in the words ‘n’ music (or at least pieces of them) for the past 10 years?

There actually isn’t a “relief” feeling. We are glad we did it, and like the way the songs came out, but never felt pressure that we had to put out a release. We just got to the place where we felt good about putting out some new songs. As far as the songs, they are a little bit of everything you mentioned above. A few of the riffs are a little older mixed with some new ideas and lyrics. It was just a good time for us to put it all together and get it done.

Guttermouth has been going at it since its inception in 1988, with a relentless touring schedule for years despite other obligations/priorities.  You’ve had major changes to the band line-up too, so who is currently causing a ruckus?  Is it the same line-up that recorded Got It Made?

The current line-up has been pretty consistent over the past several years. There have been a few “fill ins” here and there, but the same members overall. We have Mark on vocals, Matt on guitar, Justin on drums, Geoff on guitar, and Kevin on bass. Kevin was not back in the band when we wrote the songs for the EP, but jumped in right after we recorded it.

I’ve read online that you “reformed” in 2015, and that maybe you all went your separate ways in 2013.  What happened at that point that led to this hiatus?

That actually is not true. The band has been touring hard the last several years and the rumor of a hiatus, I think, was a promoter from another country that used that as publicity for a tour. If you look up past tour dates, you will see there has been no hiatus.

You recently dropped lead single “I’ve Got It Made” and it’s filled with rampant riffage, speedy drum beats, and enthusiastically tossed-off vocals that spout about a druggie who has it “made in the shade”, versus the average worker who scrapes by in life.  The general public usually misses the point of your lyrics and that your aim is reveal the narrow-minded, idiotic, and hypocritical issues that plague the USA - and that you do this via barbed sarcasm and blunt, but humorous, confrontation.  So, for clarity’s sake, what do you want the listener to get out this tune, lyrics-wise?

It’s whatever a person wants to make out of it. One could take it as a different perspective from the other side of the fence than most people are on. So many people dedicate their lives to a job where they are always chasing the carrot and never get it. Some are content doing just the opposite. In the end, we all end up in the same place, and your life is as good as you want it or not want it to be.

What other topics do you thrash out on the EP?

You will have to wait and see.

Would you say the new Guttermouth on record is the same as the old Guttermouth?  Will long-time listeners be in their comfort zone or have you incorporated stuff that will make your loyal, and new, listeners freak out (even more)?

To be totally honest, we do not know how it will be received. It really doesn’t matter what we think, because usually that is the opposite of what the average listener thinks. We wrote this with no label pressure or any other outside pressures. There was a period of years where everyone in the band would have said you will never see another Guttermouth release. Somewhere along the way, a few of us started exchanging ideas and it evolved from there. When we were in Australia last year, we stayed at a studio in between legs of the tour and, probably out of boredom, worked on the songs and wrote lyrics, etc…  We left Australia with some rough demos, came back to the States and fine-tuned them and recorded them at the Freq Zone in Florida. To us, it has the Guttermouth feel and you might hear something from a few different past albums.

Why did you decide to create an EP and not an album?

There are a few reasons. One is we did not want to “force” ourselves into writing a certain amount of songs. We had more ideas then are what on the EP, but were not happy with them. We were happy with 6 songs and that is what we are putting out. Another is things are changing so quickly with releases and people don’t really seem to care anymore whether it is a full-length, EP, etc… They just want new music and as soon as it’s out, it is passed around and downloaded. There are a few schools of thought on all of this, but we decided on 6 songs.

What is your touring schedule like for this year?  Do you all have a homebase or is your life on the road?

We look to hit the road in the fall again here in the States, and then there are some possible overseas opportunities after that. We are working closely with Bird Attack Records and Rude Records, who co-released this EP for us, on a game plan that makes sense. We have never been road-shy. California is home base for most the band and Geoff lives in Florida. Everyone has lives and different side jobs during downtime.

You’ve experienced the good, bad, ugly, and crazy while on tour – some of it self-provoked.  What was your most fun, meaningful, and/or off-the-wall experience during touring?

There really isn’t one time we can recall, nor would it be good to reveal some of the things we have seen or done. One thing is we still have fun on the road and when that stops, the band will probably be done. We are a bunch of goofy fuckers, and there is never a shortage of humor and sarcasm.

The U.S. seems to be more divisive, dumbed-down, and disconnected than ever, with the news media feeding into the public’s desire for sensationalistic stories – or maybe the news outlets are pushing that onto the public.  What is your view on the current state of the nation?

We are fucked and it is not getting better with either party.

What does it mean to be punk in today’s politico-socio-economic climate?

We have no idea.