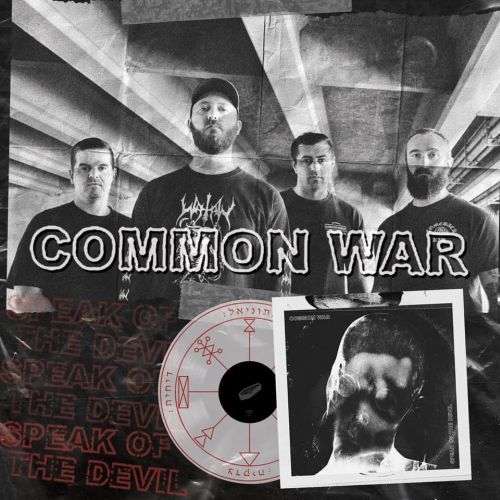 SoCal metal/hardcore supergroup Common War just dropped a new music video for their hard-hitting track “Buried at Sea.” The song comes from their recent Speak of the Devil EP, which was released late last year.

Official News: The band is made up of longtime friends David Patrick (Dying for It), Mike Cambra (Death by Stereo/Adolescents), and James Gericke, who also plays in Death By Stereo and Austrian Death Machine. Speak of the Devil was released by respected hardcore label Indecision Records (Bleeding Through, Throwdown) and is the follow-up to their 2017 LP Possess Yourself.

Latino metal/hardcore activists La Armada recently unleashed their raging music video for the track “Plagued,” which comes from their Songs of the Exiled series, a run of digital releases.

Official News: “Founded in the Dominican Republic in 2001, La Armada played a major role in building up the hardcore punk scene in its home country in the '00s, before then emigrating to the US – first to Florida, then to Chicago. The quintet's sound blends influences from metal, hardcore punk, and Caribbean music. In La Armada's hands, thrashing hardcore, inspired by bands ranging from Bad Brains to Death, is intensified by traditional Latin rhythms.

La Armada describes its political stance to be that of "decolonizing and anti-fascist lyrics, which criticize the politics of both the US and the Dominican Republic." Denouncing historical atrocities and also pointing out flaws in modern-day society – racism, police brutality, prisons for profit, to name a few – the band has put its money where its mouth is, with a long history of organizing concerts and events to raise funds for causes such as the American Civil Liberties Union and for grassroots organizations in the Caribbean.”

Worcester/Framingham. MA-located punk band Louzy has had a rotating line-up over the past 3 years, but currently consists of founder Ryan Lynch (vocals and guitar), Kyle Jeronimo (drums), and Mason Mason (bass). They’ve been playing shows throughout New England and just released a new EP.

Official News: “[Louzy’s] sound doesn’t follow any rules and goes where ever it’s going to go. They just released a new [and second] EP, No Cigar. Its four songs [feature] themes about confusion, pressures of success, and cancel culture. The EP was recorded by Jesse Coutu at The Mixing House in Milford Massachusetts.

Lenz is a master at rhythm, form, and craft, which can be heard on this sizzling and staccato to rollin’ number which he plays with bassist Elijah Thomson.

Lenz has worked with a myriad of artists/acts including Richard Swift, The Weepies, Everest, Pedro The Lion, Starflyer 59, Lassie Foundation, Duraluxe, Map, and Charity Empressa.

Popular radio radio show host Mike Rogers (of the punk rock band The Rotters) of The Mike Rogers Show, specializing in punk rock music, operates out of Japan and is broadcast on 34 radio stations, MixCloud, and Spotify. You can listen to shows from Mike Rogers’ website:

And there’s a lil connection with Jak Kerley of Shibby Pictures (which we just highlighted with a premiere for an episode of their punx-centered short sketches series) who worked on the following new music video for “Hustlin’” by NYC/NJ-located old-school anti-folk punk rockers Crazy & The Brains, with the video being hosted by Mike Rogers’ YouTube channel:

Official News: “But, I Love You” tells a relatable story about the blindspots we create when we’re stuck in a mediocre relationship. [It was] produced by multi-platinum Finnish producer Jukka B (Sunrise Avenue, Nik Mystery). DiMura calls the song “Baroque-Dubstep.”