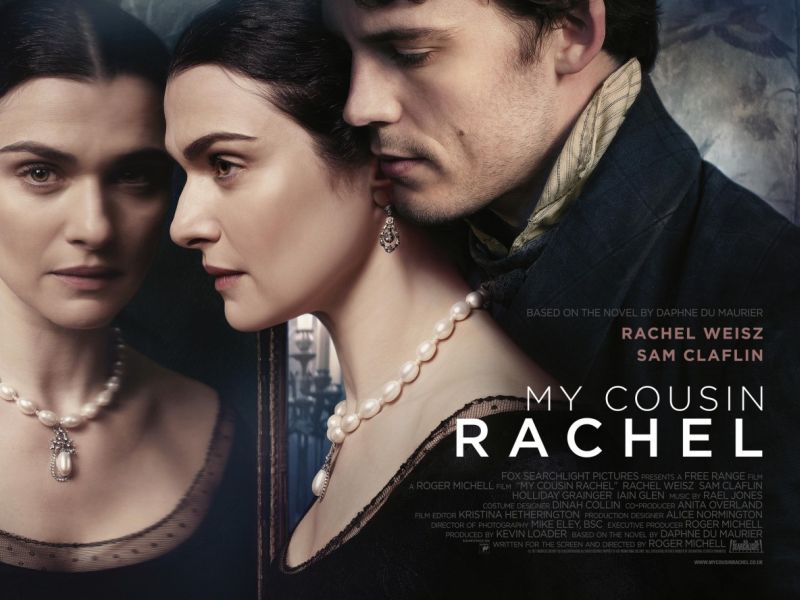 Relevant feminist themes are hidden within the suspenseful period piece mystery of My Cousin Rachel.

This article is a commentary upon, as well as a film review of, My Cousin Rachel from a feminist perspective (which in an ideal world would just be an accepted cultural view).   Spoilers follow, so read further at your own risk if you have not seen the film.

Disguised as a suspenseful mystery/romance/drama, My Cousin Rachel in actuality is a timely and timeless (unfortunately!) tale of the struggles of a woman who wants to live her own life - independently - in a male-dominant society.

I have not read the original novel by Daphne du Maurier, which was released in 1951 or seen the classic 1952 movie (or watched the BBC miniseries), but in this version of My Cousin Rachel, the realization that the main theme is about the travails and perils of a progressive woman existing in a restrictive society only fully reveals itself at the end of the film.

As the credits roll, once all of the pieces of the puzzle (well, the plot) fall into place, the viewer can finally see, and understand, the lay of the (hidden, inner) land, so to speak.

My Cousin Rachel isn't about a callow youth who is swayed by his older, experienced cousin-by-marriage to give up his money and property.  It isn't about a naive gentleman country farmer who becomes infatuated by a treacherous, gold-digging widow.  It isn't even about a fortune huntress who preys on men and slowly poisons them to inherit their wealth.

It's about miscommunication/misunderstanding, ignorance, and the narrow, relegated role a woman is bound to in the 1800s - or any time period, really - even in today's supposedly advanced civilizations.

As for the film itself, it was a solid, but not magnificent, period-piece drama.  The director Roger Michell takes liberties with du Maurier’s novel to increase the dramatic impact.  The two main action-oriented sequences I’m referring to are crucial to the plot of Michell’s version and change the burden of possible guilt from only one main character to both, leading to a different understanding of this story.

Michell uses oddly angled shots and rushing footage at times to convey suspense and intensity, but it was just disorienting or distracting to watch.  Some scenes are abruptly cut off, like when the two main characters confront each other on the staircase.  The film could have benefited from some sharper editing, especially in the slower-moving mid-section, and it was difficult to discern all the dialogue and grasp the relationships between characters.  Many questions are raised that left unanswered, but that is actually part of the veiled allure of this mystery.

Actress Rachel Weisz did a fine job as the titlular Rachel, achieving the precarious balance between being open, yet inscrutable at the same time, exhibiting a complex, opaque nature that is needed for this enigmatic character.

How actor Sam Claflin, who plays the besotted 'innocent' Philip, is received will depend upon the viewer.  The character is another challenging one, but this time because he's so simple - an almost 25-year-old virgin who has lived all his life in the company of men, doesn't care for “books, cities, or clever talk”, and has never been in love.  Fans of the actor, especially for his role as Finnick Odair in the Hunger Games movie franchise, will most likely swoon over him and his 'puppy dog' visage and manner.

Others may think Claflin doesn't have enough dramatic heft to play against Weisz, but that may be the point – That is the nature of the character Philip, after all: a simple 'boy' who doesn't understand the depth, complications, and intentions of a woman who is older and more experienced than he is.

The viewer is led down the plot’s path through Philip’s viewpoint – and at least from the feminist perspective, he has it all wrong.  It would be wonderful if My Cousin Rachel could be re-made from Rachel’s standpoint.  I think that would a refreshing and relevant change to the narrative.  Doing so would essentially strip the story of its mystery, but it would gain in the importance of Rachel herself and the challenges she has to face to survive as a woman in a man’s world.

While the film’s dialogue is ambiguous and cryptic and keeps the viewer guessing as to the innocence or guilt of Rachel, if taken from her frame of reference, Philip ends up not being so innocent after all.  It may be unintentional on his part, but Philip is at least guilty of misunderstanding Rachel's possible true nature and motives – and acting on his suspicions to tragic consequence.  It is his actions – and ultimately his rash ‘last words’ to Rachel - that bring about the shocking ending.

So, who really is the guilty party in this version of the mystery that is My Cousin Rachel?  At the film’s start, Philip in voiceover broodingly muses, “Did she?  Didn't she?”

I choose to believe that she didn’t.

While Rachel may not have been completely innocent, all she wanted to do was live her life on her own terms in a male-centered society that would not let her do so.