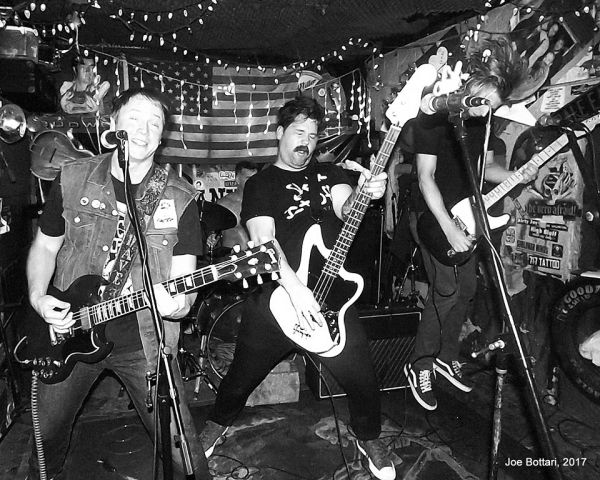 The NYC-based pop-punk act gives an exclusive rundown of each track off new album Humdinger.

From the rancid shores of Brooklyn’s Gowanus Canal rose a quartet of punk rockers called The Tracys. Raised on ‘80s punk with a side of maple syrup, Alberta native Dave Klym (The Mike Plume Band, The Populars, Itch) is the driving force behind the band's monster hooks and blazing solos.

On rhythm guitar, John Payne (Puppetbox) has been known to contribute harmonies as silky as his well-coiffed hair. Larry Mancini holds down the fort on the bass guitar with a little bit of whimsy, and a belly full of pizza. Anchoring this operation is drummer Matt Ernst, whose thunderous beats form the foundation for the group's aggressive style.

With infectious melodies and gallows humor, The Tracys' brand of pop punk holds true to the sensibilities of old-school West Coast punk. With the release of their third album, Humdinger, The Tracys continue to hone their signature sound, taking aim at what ails us with a double barreled blast of music and mayhem.

“Look at the news, the streets, your maniac uncle’s Facebook page - People. Are. Terrifying.  This song is a reflection on the bonkers nature of a society shaken to its foundations, which maybe wasn't so strong to begin with.”

“Don’t Wanna Think About It”

“Our world today can be abusive, overwhelming, and make you want to crawl into a hole and forget everything.  Also, Matt, our drummer got a cowbell, wouldn’t stop hitting it, and this song happened.”

“This song is a stadium anthem about unity in today’s day and age.  No one can agree on anything, everyone’s picking sides, and maybe the only thing we have in common is “if your team’s not my team … your team sucks.”  It was a huge honor to have Flying Jay Armant lend his talents to this song!”

“This is our ode to the bad girl of every young punks’ dreams (or maybe nightmares), typified no more perfectly than Wendy O Williams.  This is one of a handful of songs (along with “Your Team Sucks”, “Man in the Cloth”, and “Redhead Riding Hood”) that we co-wrote with the brilliant John Bendik (Cash Registers, Savage Amused).”

“Mental health is important, so take care of yourself, friends!  This song was one that kind of came together in the studio. We hadn’t really performed it live, which was a little different from the other songs.  Stuff like the harmonies, and some of the surfy guitars came from just playing around in the studio.”

“Every day runs into the next in an endless loop of repetition and apathy - and that’s how we’ll live out our days. The contrast between that idea, and the poppiness of the song is one of the ways we like to play with these concepts.”

“Man in the Cloth”

“Remember when the KKK and Nazis were just walking around like it was no big deal?  This song is a big ol’ “fuck you” to those fragile little bigots and everything they stand for.”

“Another lighthearted look at the current state of the world - fascism on the rise, capitalism run amuck, the environment under assault - what’s not to love?”

“No need for a metaphor here.  Someone in the band has a tendency to pee outside… frequently.  This one we recorded live all in one shot, and pretty much only had to record the vocals and it was done.”

“Who do we know with tiny hands and a penchant for ruining… everything? Hmmmm. Take your time. Their world will be over soon anyway. Hit the current POTUS where it hurts. We like to temper our rage with a sense of humor. It’s all about catharsis, baby.”

“Growing up she was the one girl who seemed to have all the same interests as you, no matter how nerdy they were, but you were too scared to talk to her, so 20 years later you wrote a song about her - also she had red hair.”

“I mean, this is why we play instruments, right? Dancing is hard!! We had so much fun making the video for this one. It kind of speaks for itself.”