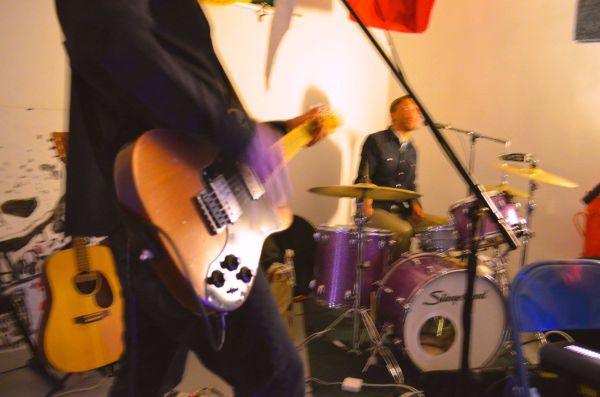 You don’t have to actually die to start over, but you might have to pretend to.  Fake Your Own Death was born out of studio apartment located above a bar in Berlin where Terry Ashkinos (formerly of indie band Elephone) was studying the fall of communism for the American government.  A handful of songs became a collaboration between Terry and drummer Scott Eberhardt, and soon after became a band with the addition of Adrian McCulough on bass and synth and Jimmy Chen on synth and guitar.

Fake Your Own Death songs are a combination of loathing and reverb. Tight beats and sharp guitars compliment a bass-heavy vibe that is post-punk at its finest.  Alluring stories about misfits, escape, and the collapse of meaning create a patchwork of uneasiness and romantic nostalgia.

The band has been compared to illustrious acts like Echo and the Bunnymen, Love and Rockets, Talking Heads, Sonic Youth, The National, and Jesus and Mary Chain by both local and national press.

Two of the band members are English teachers, one is a surfer and a scarf model, while the other one is a skipper on a yacht.  The group has played with the likes of The Warlocks, Blood Red Shoes, Racquet Club, You Say Party We Say Die, Film School, White Denim, Bob Mould, Trail of the Dead, Creeper Lagoon, The Devotionals, and Gang of Four.

Fake Your Own Death’s debut album, Invisible and Bulletproof (Monolathe Recordings), came out in 2014 and it was followed by El Terrible (Breakup Records) in 2016.

Today sees the release of the new EP shortestpoemhatestolose, a vibrant and dynamic post-punk/darkwave offering with touches of goth, noise rock, and indie rock thrown into the mix.  Rebel Noise hosts the premiere of the compelling EP.  Listen in full below: