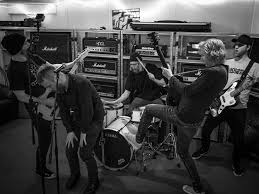 The Nika Riots is a new metallic hardcore group from Norway featuring members from acts like Man the Machetes, Torch and ieatheartattacks, so they’re not exactly newcomers or unknown in the Norwegian metal/hardcore scene. Inspired by the bands Inspired by bands like Every Time I Die, the Dillinger Escape Plan and Rise Against, they quickly started writing songs and as soon as they’ve found their singer, they started recording their first effort, a 6-track EP titled “Set Fire”. Set for release on January 19th via Negative Vibe Records, “Set Fire” sees The Nika Riots blending heavy riffs with a hardcore attitude, punchy rhythms and screamy vocals that instead of bringing anything new to the table tries to smash into small pieces.

HANGING IN MID-AIR SCREAMING AND THEN HANGING SOME MORE