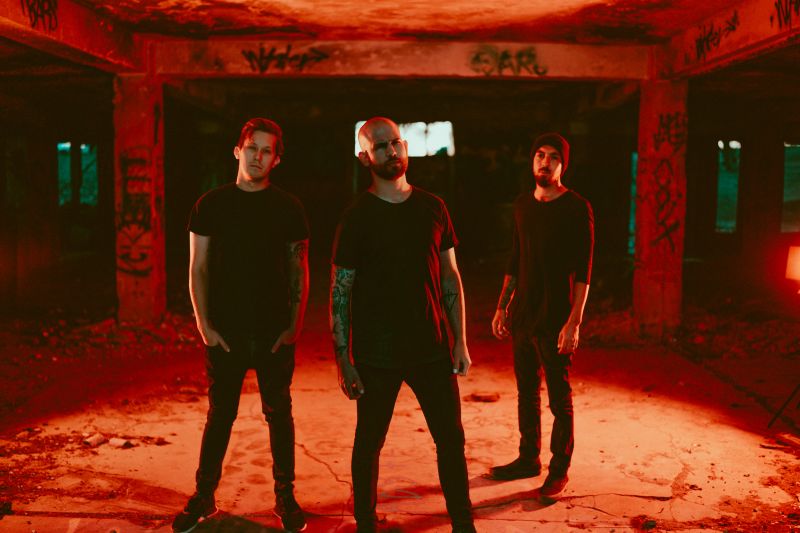 The Northern California group of friends blend aggression, melody, and ‘90s alt-rock vibes on their music.

The members of the band Down Again are all longtime friends from Northern California who’ve stormed the post-hardcore and emo scenes with their dynamic and aggressive, but also melodic and heartfelt music.

Lenny Costa (vocals, guitar), Lucas Garcia (vocals, guitar, drums, keyboards), and Alex Wechter (bass) are now in their 20’s, but they grew up in the Bay Area and spent their time hanging out, skateboarding, surfing, hiking, and attending shows.

A major influence on their vibrant sound is the early-2000s post-hardcore and emo movements that included the groups Brand New, Underoath, and Thrice.

Down Again is a relatively new band who launched their debut single “Actions & Their Consequences” in May 2020. They followed this up with their debut album, The Devil is a Gentleman, in June of the same year.

In March of this year the trio released Live Acoustic Session as a way to breathe life into their recorded music as the pandemic shut down the world, including any live shows.

Now Down Again are back at it with their potent new EP, Bury the Bones, which was unleashed on September 3rd. The EP contains 5 varied tracks, with passionate lead single “Predisposed” having arrived in early August with an accompanying performance music video.

Bury The Bones is a self-release and is available on all streaming services. It was produced by Nick Loiacono, and the music video for “Predisposed” was shot by Tyler Dugoni from Visual Hype Productions.

The band is full of amped-up energy, but they also retain a thoughtful edge to their music with lyrics that question ourselves and our messed-up world.

The band kindly answered a few burning questions about their new EP and what’s next for them.

Congrats on the release of Bury the Bones! How are things going with the EP?

Thank you so much! It feels incredible to have Bury the Bones out, and the reception has been great. It is getting played more than anything else we have released, so that feels really good.

What is the EP about? Is there a theme with the lyrics, or do all the songs have different vibes?

Really, this EP is a sort of sequel to our debut album. All of the songs tie into our first album and explore the same themes of questioning faith, loss, and frustrations. Ideas stay constant, but we really tried to push our sound, and I think you get a lot of new dynamics on this EP you haven’t heard from us before.

What are some of your influences or favorite artists?

Some of our favorite artists include Underoath, Brand New, Thrice, and The Devil Wears Prada. We take influence from such a wide range of music though. Sometimes we may hear an element in a pop song that we think could be incorporated into a breakdown. We feel that is one of the things that helps set us apart.

First and foremost, we would love to bring back Warped Tour and do a run with them - always have loved Warped. Then maybe Lollapalooza, Riot Fest, Reading and Leeds festivals, and Aftershock. All of those are would be a dream come true.

You have two new music videos out now. Tell us about those.

We are really proud of both music videos, “Predisposed” and “Can’t Make This Right.” They are really polar opposites, with “Predisposed” being filmed in an abandoned hotel in the middle of the night and “Can’t Make This Right” in a beautiful Victorian mansion. We shot both with Tyler Dugoni from Caliber TV and he was fantastic to work with. You can expect us to do more music videos with him in the future.

What’s next for Down Again?

You can definitely expect more new music. We are already busy working on what’s next and I can’t wait to put it out. Also, we will be pushing to play these songs live as much as possible. We have all been missing playing shows and we want to make up for lost time.