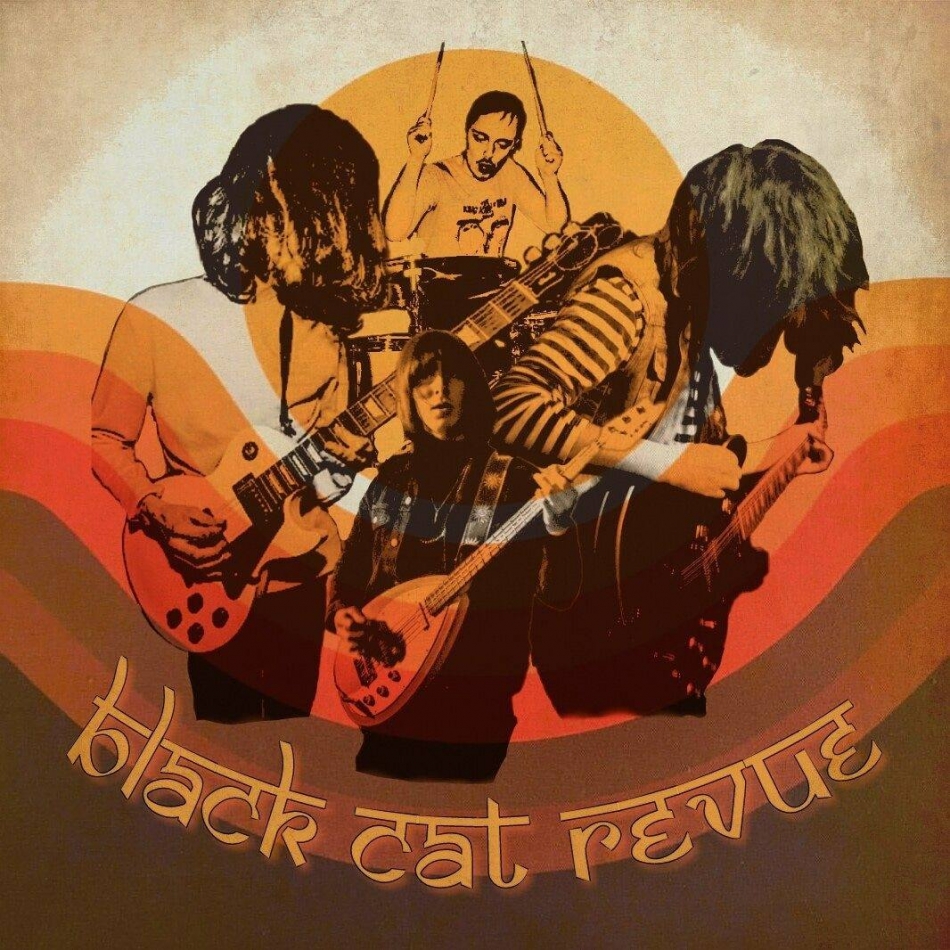 If you haven’t heard about the garage rock band Black Cat Revue it’s possibly because they are all the way from Glasgow, Scotland. So how’d we find out about them? Well they are one of the newer UK bands signed to New Jersey Indie label Mint 400 Records and they put out their debut EP “Fortune Favours The Strange” earlier in 2021. The band is now gearing up to release a second EP titled “The Ballad Of Django & Fuzz” on September 24th. Today we not only have an interview with the band about it but we have a song premiere of the track “Down River”.  Enjoy both!

Is there anything different in the writing process between this EP and the last one?

Jimi: To be honest, not really. We both still write separately then bring our ideas to each other and offer changes where necessary. This batch of songs have been in our back catalogue for a while in various forms, so to have them finally put to bed, from a songwriting perspective, is a good feeling. This EP definitely felt like a palate cleanser to me, allowing me to free up the headspace to start on the next project.

Smokey: Yeah, it’s been great to get this group of songs finished and out into the world. The process was much the same as always, we worked out our ideas individually, met up with some acoustic guitars over a night or two and then the band got stuck in. I definitely think having more time with these songs, we’ve put a lot more focus on the musicality. We’ve spent many hours in our space working out what serves each song in the best way.

What have you learned about the overall process between the last EP and the new one?

Jimi: Tony helmed this EP much like he did the last time. I'm not qualified enough to explain the process, but the idea was always to create a direct follow up to our first EP "Fortune Favours The Strange". If Fortune Favours the Strange were an LP rather than an EP, then "The Ballad of Django & Fuzz" would be side 2 of that record.

I feel we got pretty close to what our aim was. These two EPs in their finished form are now a pretty good representation of our live set from 2018 to present. Also, it was pretty cool having friends of the band Neall & Meaghan from Blumehaus/Somnabulist over in Northern Ireland collaborate with us and chip in with the moog/synth/sitar/tampura in order to give the Reprise section at the end the extra flavours it needed.

Smokey: Just in general the amount of work put in behind the scenes this time round. I feel with the lockdown and all the relevant restrictions we really focused in on some of the finer details this time round. Again, Tony really gets most of this credit, but it was cool to see so many pieces coming together over a longer period of time.

Lyrically what is the theme of this new EP? Favorite lyrics from it?

Jimi: Personally speaking, I don't really like talking about lyrics too much. I'd rather people take their own meanings from the words. I can say that they come from a space of creative writing rather than being mined from some personal experience or trauma. There are songwriters out there who can sum up my emotions or state of mind far better than I could ever articulate, but I'm more focused on learning more about how to use the craft of songwriting as a story-telling device as opposed to expressions of love, grief or other.

Lyrically, I took a lot of influence on this EP from the more esoteric sides of the likes of John Lennon, Bob Dylan and Harry Nilsson. Most people would be drawn to "The Times They Are A Changin" or one of those big albatross songs, whereas I'm more drawn to "Highway 61", Tombstone Blues era Dylan. He just sounds like he's having more fun once he's taken his voice of a generation hat off.

Smokey: This time round has been a lot looser for me personally, just drawing influence from our weekly rehearsals and trade off's in conversation. I had been reading Roberto Bolano around the time of the lyrics being written and watching a bunch of old westerns, so I'd say they probably had the most amount of influence in the lyrics. We had the music written for a while with these songs, so it was really fun to throw paint against wall and see what stuck, more importantly felt right.

How do old movies tie into the overall look of the album cover and the title of this new EP? Who exactly are Django & Fuzz?

Jimi: I've got a deep rooted love for old American cinema, from the late 50s through to the early 80s in particular. Westerns to B-Movies to the classics. Film as a medium is my first true love but I fell into music as a teenager as it was far more accessible for a young guy from a working class background to get into. My dad plays guitars and so did many of his friends, so there were always guitars in my house. Growing up, it seemed like movie stars either fell from space or were old English bourgeoisie Tory types. Neither of which is very relatable in central Scotland.

Django & Fuzz began as "Jangle & Fuzz" which was a terminology we used to use back in the day to describe our sound, which at the time was a fuzzy Les Paul over a bright 12 string rhythm guitar. We've moved away from that over the years but we would still use the moniker "The Ministry of Jangle & Fuzz" when promoting our own shows.

We were looking for a title for the title track on the EP. It had been through a few different titles and none of them really stuck or felt right. All I knew was there were two protagonists in the song, so when the penny dropped and jangle was changed to Django, the floodgates opened in a torrent of ideas, to the point I'm currently working on a "The Ballad of Django & Fuzz" screenplay. For no other reason than the creative pursuit.

But who are Django & Fuzz? They're in everyone and they're no one, all at the same time. In my mind, I see them as a Butch Cassidy & The Sundance Kid type duo on iron horses riding through the salt flats leaving a trail of chaos behind them. But it could be you and your best pal. Any odd couple. Depending on what friend you're with, you could be Django or you could be Fuzz.

Has the band begun practicing and playing out yet? You have a release show coming up, tell us the details and about the bands you picked to open up?

Jimi: We were fortunate that we moved into our own rehearsal space roundabout this time last year so we've been busy working on ourselves. We spent the last quarter of 2020 primarily focusing on jamming the songs from this EP before we began recording in January. The bulk of recording took place between January and April with the final touches done over the Summer.

Other than a livestream event we did last October, we haven't played a show since the initial release of "Fortune Favours The Strange" in early 2020, so it's been a long road to get to this point, however, my anxiety is becoming omnipresent so that means the show is just around the corner.

Smokey: We've got the release show coming up on Saturday 25th September, which we're all really excited to play and I suppose equally nervous to share the songs for the first time live in nearly two years. It's at The Flying Duck in Glasgow, we've played a few shows there over the years so it will be good to have our first outing on familiar ground.
We've got a line-up of friends playing with us which makes it extra sweet to be back playing live. We've got  Andy McBride the intrepid troubadour of Glasgow's folk scene.
Las Acuarelas are a sun drenched psych four piece (their frontman and songwriter Gary, used to play Bass with us back at the start so it's always great when our bands line up these days).
Then finally we have The Dreads, coming all the way from Belfast to play with us, a fervent and emphatic organ-inflected 5 piece rock n roll band.

How do you think shows in Glasgow differ from shows in other parts of the world?

Jimi: I love Glasgow, and consider myself really lucky to have grown up in one of the most gorgeous cities in all the world. It appears that everyone who visits Glasgow falls in love with the place, which can't be coincidence. I think the Glasgow audiences are without doubt more uninhibited than the likes of an Edinburgh or a London crowd. But I've been to plenty of shows in other parts of the country and I don't see a great deal of difference between a crowd in Manchester and a crowd in Glasgow.

Smokey:  It's a great city to play, we take huge inspiration from being Glaswegian. Glasgow is a such creative city, this makes for a huge melting pot of scenes and crowds. I think for the most part this helps younger bands find their crowd and build an audience for themselves, playing a variety of different small nights with eclectic bills. However, it can also lead to some exclusion. This being said, for the most part even those excluded bands from the "main" scenes in Glasgow have another 30 gigs happening around them to make their own statement and keep pushing, its certainly a "DIY" city for 95% of the bands here.

What is up next for the band? Are songs written that don't appear on this EP?

Jimi: We've got our first album probably about 80% written at this point. A good portion of it was written a few years ago, another good portion was written during the initial stages of lockdown last year and over the next few months the last few songs will be worked out. We're in the process of discussing who we want to produce the album and bring the right people in to work with us, rather than us keep everything in-house as we've done previously.

Without giving too much away, it's a concept album which if all goes well will span probably about 18 tracks. Sonically, it'll be some new territory for us, moving away from the more traditional garage/psych stuff we've previously released. Many of the songs are in different tunings (Double Drop D, DADGAD, Open D) and at its heaviest will be really dark and droney. Like Neil Young & Crazy Horse playing the Black Angels debut album. On the flipside of that though, there are tracks currently in the works for the record that are piano driven or acoustic based. We've always felt that we've had more strings to our bow than just being a garage band, so we look forward to the future when we can show that to the good people.

Smokey: As mentioned earlier, films are a huge influence within the band and we would love to start experimenting with how we can merge our live sets with more visuals and stories. We've always been inspired by bands who can also create something visually interesting on stage as well as sound great, so it would be cool to start delving into this side of things. Seeing Sonic Boom as one of our first gigs back recently at Stereo in Glasgow, really cemented the idea of trying to create more of a show on stage to go alongside the music. Especially when we can merge it up with the new album, really create something bigger and more developed than we've attempted before, both musically and visually.