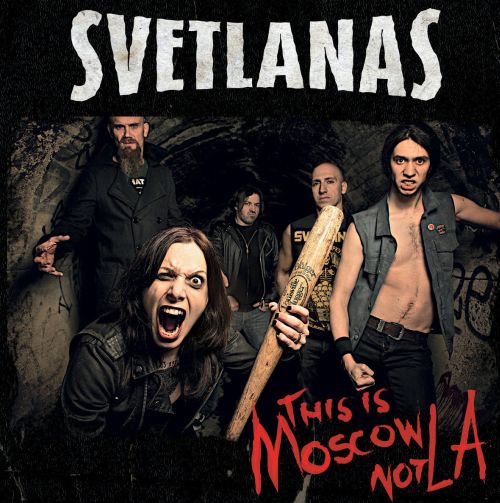 Russian thrashcore/punk band Svetlanas dropped a sonic bomb back in March with the release of the album This Is Moscow Not LA via Rad Girlfriend Records / Subkultura Records.  The 100% DIY band is composed of Olga (vocals), Ricky (guitar), Steve (bass), Diste (drums, and newest member, Nick Oliveri (bass) of Queens Of The Stone Age and Kyuss fame.

The super-intense, kick-ass band is (in)famous for its wild live performances at international music fests like Warped, SXSW, Upstart Fest, and Rebellion Festival.  Punk and rock heavyweights like Malcolm McLaren, Gene Simmons, and Jello Biafra have all gone to bat for the band and lead in-yer-face screamer Olga.

In 2015 Svetlanas teamed up with Blag Dahlia of The Dwarves for a split 7" split, went on a European tour, and also released a split 7” with The Adolescents titled Hot War.  Oliveri came on board in 2016 and this year the band completed a month-long residency at the legendary Whisky a Go Go in LA.

This Is Moscow Not LA was recorded at Josh Homme’s (QOTSA) famed Pink Duck Studios.

Svetlanas recently premiered a video for the single “Let’s Get Drunk” and are playing select dates in support of the album.

SVETLANAS "Let's Get Drunk" - Official Video from SVETLANAS on Vimeo.

Purchase/Stream This Is Moscow Not LA at Bandcamp

Jul 30 The Star and Garter in Manchester, United Kingdom