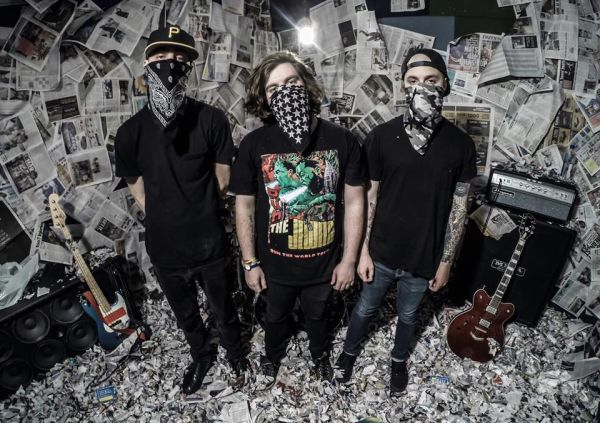 The alternative/hard rock band releases an intense new tune and dives into some interview questions.

Long Island, New York’s Like Minded Criminals is Kevin Preller, Eric Ponto, and Anthony Quartararo. In the short span of two years these three self-taught musicians have been causing a ruckus on the East Coast, playing alongside bands like Crack Rock Steady 7, Michale Graves(the Misfits), Everyone Leaves, and more.

Like Minded Criminals just completed their first full-length record at Vudu studios, which is produced by Frank Mitaritonnia (Dillinger Escape Plan) and mixed by Mike Watts (The Deer Hunter, O'Brother).

“Grace Under Pressure”, which Rebel Noise premieres here, is a heavyweight workout of 3 minutes and 45 seconds of brooding angst that builds in intensity with a wall of guitars and wretched vocal howling from singer Preller.

Preller goes into detail about the meaning behind “Grace Under Pressure”, revealing, “For me, it’s one of the most meaningful tracks on our album, the song skirts around both the loss of a father figure to me and the loss of my girlfriend at the time, Grace. Thomas Peterson used to own our local music store on Long Island, Eastport Music Scene, and was a strong father figure in my life; he was always there when I (or anyone else, for that matter) needed advice. He lost his battle with cancer on 4/28/15. The song is ultimately about realizing your own mortality and that your actions affect other people.”

Preller and the band also unveil more details about themselves and their music in the following INTERVIEW:

Hi guys!  So you're from Long Island, NY.  What's the live music scene there like and how do you fit into it?

Hey! Thanks so much for taking the time to talk with us! The Long Island music scene is kind of interesting I guess.  For the most part it tends to be very "cliquey" based on genre or location. Which makes it interesting for us because we have some really light acoustic songs and some really heavy songs so we tend to try and float around to everyone and not get too deep with anyone one clique.

We're premiering your emotive alternative rock track "Grace Under Pressure" today and it moves between calmer verse passages and crushing chorus sections.  Can you give some background on the meaning of the song?

The song is sort of reflection on mistakes I've made in my life. The absence of words in the choruses kind of symbolizes the fact that all of these things are in the past and there’s not really anything I can say to fix them or make them better. Just have to keep moving forward.

You're all self-taught musicians!  How difficult was it to achieve your current skill set?  Is it a lonely, focused road to follow or have you enjoyed the process?

At what stage are you in recording your debut album?  Have you released any singles or EPs prior to this upcoming full-length?

The album is definitely complete. We’re really happy with how it came out and have to give a huge thanks to Frank Mitaritonna who produced it and of course to the great Mike Watts for mixing the record to perfection. This is our first venture into the world as LMC but we have all played in bands together our whole lives. We have released 2 other singles so far ,the first being "20,000 Leagues Below The Sea" and the second, "And I'm The Liar?!"

Is "Grace Under Pressure" a good indication of what listeners will encounter on the album?

Definitely! “Grace” is actually my personal favorite song on the record. We've got heavier songs and softer songs but “Grace” is pretty much right down the middle and the lyrics are definitely indicative of what you'll hear on the rest of the album

Which artists/band inspire your sound and/or outlook?

We could easily talk forever about our favorite musicians so I’ll try to keep this short - haha. My personal go-to answer for this for a while has been Soundgarden which is light of recent events has hit us all pretty hard. We all listen to a pretty wide variety of music from rap to hardcore to sad acoustic songs. Lyrically I consider Elliott Smith to be my all-time favorite idol but we draw from obvious bands such as Queens Of The Stone Age, Royal Blood, The Chariot, and others.