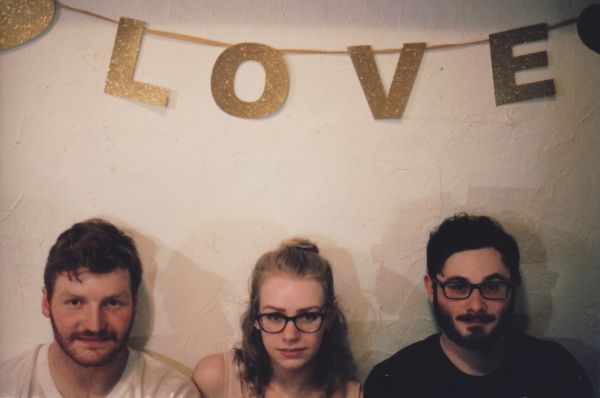 Ohioan pop-punk/garage-rock trio Slimfit drop a hot and spirited punk tune and a super-amazing video (Not!).

Rebel Noise has the premiere of the surrealistically-titled track “Homer Simpson, Smiling Politely” (I mean, does he ever?) with an accompanying heart-pounding, eye-popping video of the band members eating, drinking, and tapping on a smartphone in a food court.  Yes, way!  You will be amazed! Okay, maybe not so much by the video, but the song is really cool in a rough, odd-pop/garage-punk way, with rambling, but still relatable lyrics.

“Homer Simpson, Smiling Politely” starts off unassumingly in the singer-songwriter mold, but with off-kilter, sing-song vocals from Davis – but then it suddenly bursts out into a full-fledged, raucous punk rock number, furiously racing and vocally roughshod, sprinting towards the finish line in triumphant indie punk spirit.  Go Browns! I mean, Go Slimfit!

Davis gives the scoop on the tune, explaining, “This song is loosely based on a couple of friends of mine who have had very high expectations placed on themselves from various sources in their life. Sometimes, you can just tell how stressed out and flustered they're getting because they don't feel that they're meeting the expectations that others have placed on them. In reality, if they were to base their success on their own values, they would see that they're actually doing great and that part of being happy is being able to stop worrying about others' expectations and start focusing on yourself. Obviously, this is easier said than done, but it's a good reminder. Hopefully one day, I'll learn to take my own advice!”

Davis continues the musical thread, dishing the dirt on Sorry About That, saying, “The album, which is coming out on the 21st, took a very long time to come about, but I'm so happy with how it’s turned out. My producer, Maddy Ciampa, was producing many other records at the time we began, as well as playing in many bands herself (shout out Keating, Steven King, WYD, Classical Baby). Because of this, we could only work very sporadically on random days and sometimes would go weeks without recording. It was actually originally going to be an EP, but because it was a drawn-out process, I continued writing new material and eventually we had enough songs to make a full album.”

An enthusiastic Davis concludes, “I'm personally enormously stoked because this is my first musical venture with a full band. I've wanted to play in a band my entire life, but it never seemed like something that would become true. To be able to listen to these songs and hold the physical CD in my hands is a dream come true and I'm eternally grateful for my bandmates and for Maddy, who put an insane amount of work in on this project. Next goal is to hit the road and go on tour (which is INSANE to me that that could even be an option for us!). If you're reading this, go pick up an instrument.  You can learn how to play it and make a record.  It's easily the coolest thing that I do with my time! I'm going to go watch The Simpsons now - Good night!”