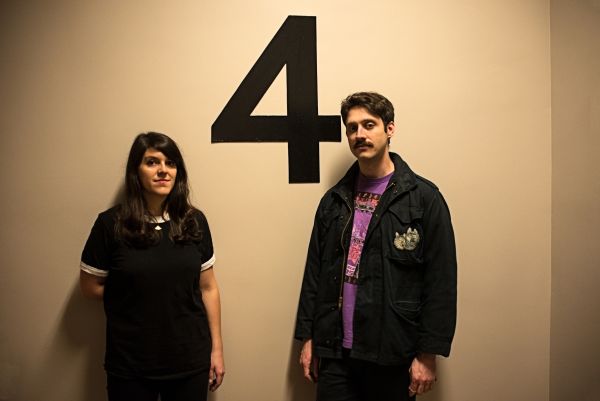 Athens, Georgia-based rock ‘n’ roll duo Eureka California have been mining musical gold for around a decade while going through various line-ups, tours, travel, and side jobs.  All of the ups and downs and long journeys are captured on their upcoming album Roadrunners, due to hit the street on May 4th.

Roadrunners, the band’s fourth album in six years, could only have been written by living it. There’s no trust fund or start-up money; only an LP made by a band that works really hard. It’s real, it’s now, and it’s a record about frayed nerves, exhaustion, triumph, and being fed up and calling it out.

Jake Ward (vocals, guitar) continues to climb to the ranks of classic songwriters and lyricists with Husker Du and Superchunk-like anthems, including “Mexican Coke.” Or “Threads,” which tackles the panic of nuclear war and the fear of who has the launch codes while sounding like Pink Flag-era Wire writing a sunny pop hit about the end of days.

Then you have the other half of the band, Marie A. Uhler (drums), who attacks the drums with passionate vehemence. With her signature Cousin It hair hanging over her face, she energetically pummels her kit night after night. She’s worked a job that nearly killed her and wrote the lyrics to “JJT” about this universal truth a lot of people are currently living: “All of my adult life is working to nearly die, to barely get by under the poverty line.”

For Roadrunners, Eureka California returned to Leeds, UK to record for the second time with MJ of the band Hookworms at his Suburban Home Studios.

Rebel Noise is excited to premiere the restlessly propulsive cut “How Long Has This Been Going On.”  It’s a classic slice of dynamic American indie rock teeming with agitated, but bright guitar lines, darker, grinding bass line, punchy drums, and kicky cymbals crashes. It’s shot through with Ward’s frustrated vocal exclamations, emoting about a “panic attack” and “the pit of my heart.”

Ward reveals that, “For the life of me I don't remember how this song came together. It seems like for a long time it wasn't here and then, Bam! – magically, there it was. One of my favorite things to do in songs is to reference the things I'm listening to or reading in songs and in this one I reference: Duran Duran, the band Martha, Los Campesinos!, Steely Dan, and T.S. Eliot's poem, The Love Song of J. Alfred Prufrock. It's one of my favorite songs to play live ‘cause the distorted bit reminds me of The Who.”

Eureka California are in the middle of touring the East Coast and soon the West Coast, and they have other gigs lined up for the summer. Tour dates are listed below, so catch ‘em in the act!

May 18: Seattle, WA at Woodland Theater w/ Flying Fish Cove
May 19: Portland, OR at Pop Tavern
May 21: Arcata, CA at Miniplex
May 23: San Francisco, CA at The Knockout
May 24: Oakland, CA at White Horse

The Melvins Debut The “Don’t Forget To Breathe” Video