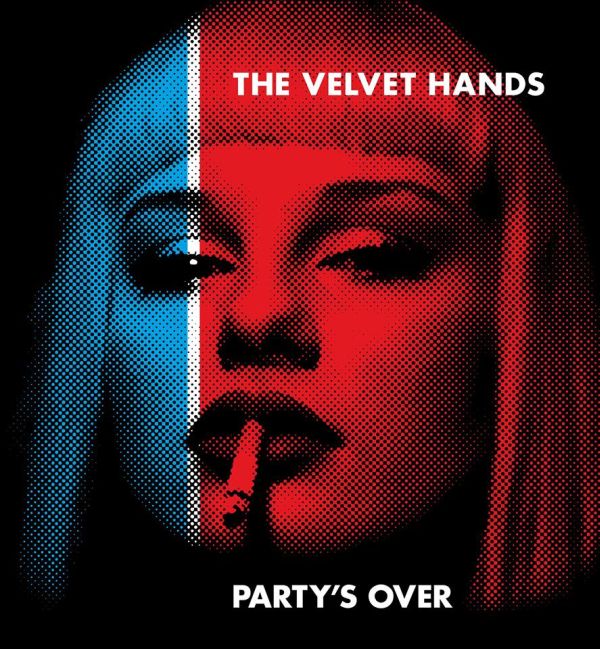 British garage rock band The Velvet Hands bows a vintage performance video for a crackerjack track from its upcoming LP.

British garage rock band The Velvet Hands kicked off Record Store Day 2018 with the release of a limited edition blue vinyl format of their upcoming album Party’s Over and now they’ve unveiled a throwback Rat Pack-inspired video that accurately, yet bemusedly, captures the jaded sentiments, faded allure, and deflated connotations of the LP’s title.

Rebel Noise has the US premiere of the video for “Gimme Some Time”, the track that ends side A of the vinyl version of the record. The London-living band members are rambunctious and ramshackle rapscallions on record, conveying a defiant punk spirit and coolly laid-back attitude that permeates their live performances.

“Gimme Some Time” is no exception.  It’s a loose, but tuneful rock-infused sing-along that would sound equally at home in the repertoire of The Stones of the ‘60s and The Strokes of the ‘90s.  In other words, classic rock.

The video, directed by Ryan Still, maximizes that retro vibe, with the band members playing in a typical vintage nightclub with dimly-lit tables, ciggies in glass ashtrays, and a sparse and bored audience sitting around with drinks at hand.

Co-frontman Dan Able croons Sinatra-like-casual at the mic (scruffily suave in a dress jacket, but minus the traditional white shirt) while the rest of the band (co-frontman Toby Mitchell (with a delightfully dated pageboy hairstyle) on guitar, Sam Hilder on bass, and Louis Wilbourne on drums) smile cheerfully and play their instruments like clean-cut ‘50s musicians on The Ed Sullivan Show.

An inebriated Able (in character, one presumes, and hopes!) rambles on, stumbling drunkenly on stage and among the patrons, alienating both them and his fed-up bandmates who finally leave him to implode alone in the spotlight.

Party’s Over arrives May 4th in all formats on Zen 10, an imprint of Easy Action Records. As mentioned at the start, on April 21st (Record Store Day) a limited edition run of the LP bowed, and wowed, on blue vinyl.