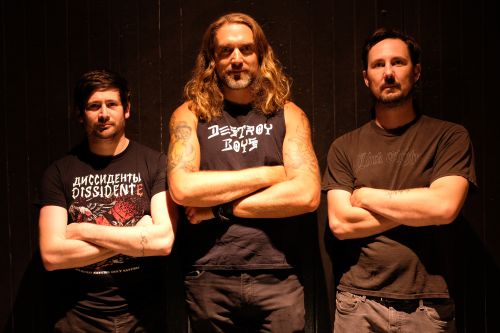 San Francisco East Bay’s Omnigone is a newer ska punk band with veteran musician Adam Davis at the helm. Two decades ago, Davis was part of the hardcore punk/ska band Link 80, and now he’s back with the band Omnigone and continuing to rally fans of the ska, punk, and hardcore genres.

Omnigone is releasing their debut album, No Faith, on September 13th via Bad Time Records.

Ahead of the LP’s release, Rebel Noise is stoked to host the premiere of the track “Rather Be Alone”, a more downtempo and reflective number from Omnigone.

While much of No Faith is high-energy and intense, “Rather Be Alone” is cool and smooth, yet still jumpily rhythmic in typical ska tradition. Davis croons tunefully through the track amid echoed and starry synths and warm saxophone notes from Borth, formerly of Rx Bandits, a deeply rubbery bass line, cymbals tingle and crash, and a punchy drum beat.

Davis reveals the sweet backstory behind the lyrics of “Rather Be Alone”, commenting, “When DESA was on tour with the Rx Bandits (04.19.04), we played at the Cavern Club in Exeter, UK. I was watching RxB from the back of the crowd, and they were deep into a jam between songs. Usually these were instrumental, but this night I heard Matt sing the line “I’d rather be alone than happy with someone else”. That line hit me like a bolt of lightning. I knew in that moment, when I returned home, I needed to pursue a relationship with the person who is now my wife.”

“Fifteen years later, we have two kids and ten years of marriage under our belts. When I wrote the lyrics to this song, I checked, and Matt was actually singing a chorus from a Nina Simone song, which has slightly different wording than the way I remembered it.”

“Also, the first two lines are lifted from two other songs that my wife and I both like (we only like about six of the same bands). Props to you if you recognize them. The plan was to not show her the song until the album came out, but the boys started singing the chorus to her before bed one night.”