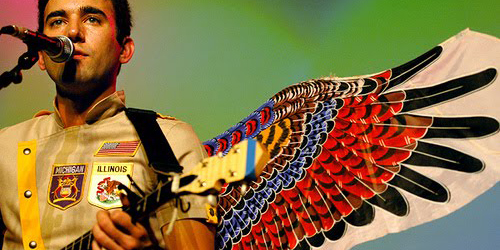 Music recorded over a single night by Sufjan Stevens, The National’s Bryce Dessner and more has been collected for limited-edition release ‘One Night Stand’.

Gaspar Claus invited several artists – also including members of Porcelain Raft and The Men - to collaborate for the Brooklyn-based project in 2012. This 11-track, 70-minute release collects elements of the performance, with The Blogoteque’s Derrick Belcham providing an accompanying film.

The release will be available June 30 as a limited edition double-LP through Microcultures.

The singer-songwriter and multi-instrumentalist will embark on his first British and Irish tour in four years during August and September, playing dates in Dublin, Edinburgh, Manchester, London, Brighton and Bristol. As previously anounced, Stevens will also headline End Of The Road Festival on September 5. Scroll below for the full dates.

Sufjan Stevens released new record 'Carrie & Lowell' through his own Asthmatic Kitty Records last month (March 30). It's the follow up to Stevens' last studio album 'The Age Of Adz', released in 2010. Prior to that album Stevens embarked on an ambitious plan to write and release an album representing each of the 50 US states. At present the mission has birthed two albums ('Michigan' and 'Illinois').

Meanwhile, 'All For Myself' from Stevens' 'The Age of Adz' has also been sampled on Kendrick Lamar's new album 'To Pimp A Butterfly.' The sample appears on Lamar's 'Hood Politics', which was produced by Tae Beast, Soundwave and Thundercat.