The Cheek of Her Interview 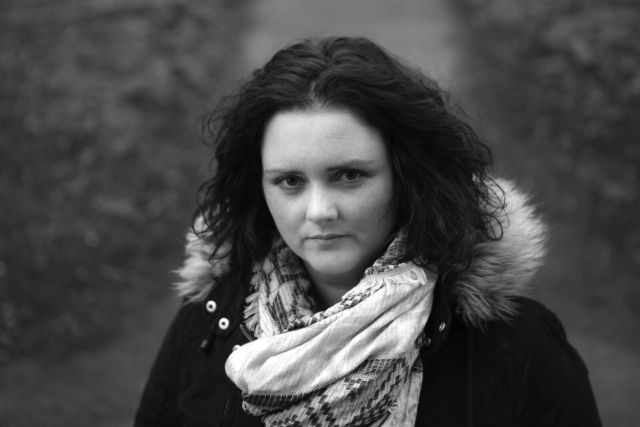 The Cheek of Her, AKA Helen Dooley

London-based, indie singer-songwriter The Cheek of Her, AKA Helen Dooley, keeps it real on her passionate, piano-driven songs.

Hello Helen! It's such a pleasure to connect with you about your recently released Black Heart Mantra EP that chock-a-block with perceptive lyrics, your vibrant vocals, and piano-based instrumentation. From what I understand, Black Heart Mantra is your 3rd EP and you also have a debut album to your name. How is everything going for you at the moment?

Hi Jen! Thank you for taking the time to interview me, and yes, you have got all the information correct regarding The Cheek of Her releases and vibe, which is refreshing. Black Heart Mantra, as you say, is my third EP, previous EPs being Passionate Shit (2011), Megaphonic (2013), and I also released a full album, Adult Angst Anonymous(2014), prior to Black Heart Mantra.

I fell into songwriting later than many, in my late 20s, so I was literally gushing to write, release music, and basically take full advantage of this outlet I had found to express myself and my emotions creatively. So yes, I was churning out the tunes, and recording pretty full-on the last few years!

Currently I am just trying to promote Black Heart Mantra, and I'm getting some good coverage press-wise, but going to focus on the airplay from next week on!

Can you divulge some details about the new EP and how it compares with the rest of your discography? What are the main themes that you hit upon this time around?

Yes, I think it's more contemplative than previous releases, in terms of considering life as a fixed period you have on the planet, and the inner turmoil with what you want to achieve, and just reflecting on relationships and how you have acted in them, and the possibility of never finding The One!

So all very personal and 'big issues', but presented in a colourful, upbeat kinda way. You can't take yourself too seriously!

I've also had enough of crappy relationships, and Black Heart Mantra, the title track, is literally a warning song! "Don't play with this heart, this heart of mine!"

What was the creative process like for Black Heart Mantra? Besides Sean Kennedy on guitars, bass, and strings and Chris Hardwick on drums was this a 100% DIY project?

It's very organic! I literally just write the songs on the piano, which could start off as a piano riff and then I hum to that. The words come out, I don't force them, but I just sing words that fit in with the riff and the sonics together. I may just leave it at that for a while, and come back to it a week later and finish the song. Sometimes I can just sit at the piano and write a song in an hour! It really depends, but I never force it. Once I have the track in its pure form, I usually just play it a few times and record it on my phone, singing and playing live.

After that, I make a demo with an embellished drum loop, and I add keys, vocals, strings, backing vocals, and whatever else I deem necessary to bring into the studio to 'tart' up the track!

Chris Hardwick was in my original band line-up, but he's a friend too, so he recorded live drums on these tracks partly at his own studio and partly when we met up in London at a studio and recorded some tracks together, with Sean Kennedy.  I then usually go to Sean's for a day or two and we do some more production and any vocals I don't manage to get down in a previous session.

So it can be a bit piecemeal and a drawn out process, but there is a definite demo and structure to work from, which helps a lot.

What has the musical climate been like in London since you first started out as The Cheek Of Her in 2011? What changes have you experienced over this time period?

I jumped into music head-first and naively, as many an Independent Artist does, unfortunately! You are driven by the passion, positive response, newness, and excitement!  Plus, you just gig everywhere! So it was good fun, but over the years I have become more cynical...

I think I presumed that if you worked hard on your tracks and performance, you'd probably 'get discovered' or something... but it doesn't seem to work like that!  Also, as I mentioned earlier, I fell into music later in life, so for me it was all a new thing, whereas others around me would say I was a 'mature artist' and I would be confused, because I had only just started out!

I never actively pursued a recording contract, so I think I probably knew deep down that the mainstream wasn't for me, or that I wanted to be answerable to someone else in terms of my music. I guess the downside of that is that I just won't reach a large audience without the marketing power of a label.

In terms of the musical climate in London since I started, I don't think it's changed that much. There are still bands gigging round the circuit, not getting paid, just doing it for the love of it.  Maybe 1% will actually be able to make any sort of proper living out of it. You see, told you I've become very cynical!...

I feel like the spirit of Amanda Palmer runs strongly through your vocals and piano-playing. Is she one of your main musical role models?

Funnily enough, I had never even heard of Amanda Palmer until 2012! Sean Kennedy (long-term collaborator on The Cheek of Her material) mentioned that I should 'check her out', as he thought I'd like her music. I forgot he mentioned that to me, but I came across her online a few months later and told him about her; then I realised he had mentioned her to me first!

But YES, she's great, but I was doing my thing way before I even knew about her!... So, pretty cool to be likened to the amazing lady!

When did you start taking piano lessons and did you always want to be an artist in the singer-songwriter mold?

I took piano lessons as a child for a few years. I didn't really get on with grades or anything, the classical style of teaching didn't suit me, and I'm annoyed that there were other options of learning the piano available to me at that time. I knew I was musical and sang in choirs too, but I abandoned the piano, as I would rather learn something by ear than read music. Most band musicians I know just pick things up when they hear it a few times. Obviously it's great to be talented both ways, but I'm not! I can read music, but my ear is far betting than sight-reading!

Artists which inspired me growing up were Alanis Morissette, The Cranberries, Skunk Anansie and No Doubt, so just strong female leads with attitude. So I guess I envisaged myself doing something similar, but not necessarily sitting at a piano doing it!

Have you ever considered working in the writing field as an author of books/articles/blogs? I ask this because you write about being a woman in modern society and it definitely touches a nerve.

I love words and melody, and how words fit into melody, rhyme, and storytelling. So yes, I have considered working in the field of writing. I don't know if I have the patience and perseverance to write a novel, but who knows, one day? I write a blog on my own website, but it's not normally too 'involved' just more for information purposes.

Writing in the broader sense, not just songwriting, is something that I wish to explore further, so watch this space!

Your lyrics are sharply, and many-a-time wittily, astute and feel like they're taken from pages of a journal. Do you keep a running log of material for your songs?

Thank you. I honestly don't try too hard, and that is the key for me at least. If it flows and comes out of my mouth, and I'm being honest and true then the lyrics just come out of nowhere! I don't keep a journal / diary.  I tried to do that maybe three or four times in my life and failed! Normally it just turned into a few pages of moaning, so now I just put that into a three or four-minute song!

"The Future Is Purple" asks the big questions like "What do you want from this life?" How is it all shaping up for you at this point? Are you where you want to be or are there still things that you're trying to attain?

I was being completely sincere with that question in the song! I envy folk in a way who seem to know exactly what they want from life. If you know, then you can focus and achieve it.

Up until this point in my life I always had some sort of a plan, something I was working towards. Music took over and consumed me, but I've realised that it's not perhaps viable to make a full-time career out of it as an original artist (which is also clearly down to me wanting to keep my music personal and perhaps do things my own way, as and when I feel like it, so you can't have it every way!).

So now I've come to a crossroads, where I've written and released lots of songs, performed around London solo and with a band... and perhaps that's it?  "Do you crave world domination, or do you wanna be somebody's wife?" - that's the answer to the question in the song “The Future is Purple” -  another question!  My answer to that at the moment is that I don't crave world domination, but recognition for the hard work and passion I have put into my songs would be lovely. I'm not obsessed with being somebody's wife, less so as the years go on!...

What's on the horizon for you? Do you have any live shows lined up? When you perform live, do you do so as a three-piece band or do you strip it back to just you and your piano?

I've gigged as a five-piece band, and I've also gigged solo just with the piano. Different vibes, but all fun! Girls tend to appreciate the solo gigs, as they can hear the words, rather than me being drowned out by the band! I haven't got any live performances lined up at the moment, as I just want to see how the promo goes for the EP for now, but watch this space!