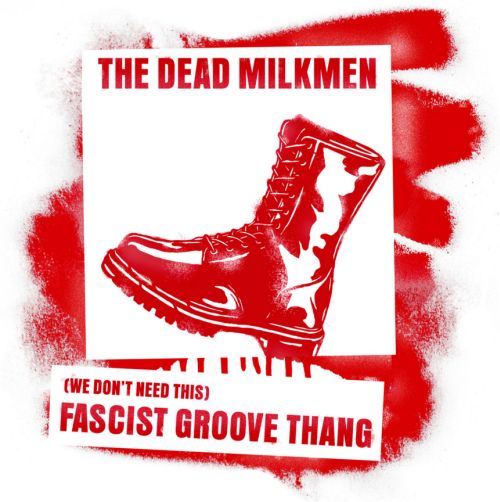 The Dead Milkmen - "(We Don't Need This) Fascist Groove Thang"

The legendary punk rock band deliver an anti-fascist anthem that was originally released by Heaven 17 in the Reagan/Thatcher era.

Philadelphia-based punk legends The Dead Milkmen continue to deliver their mordant take on punk rock music, this time targeting the ugly head of fascism on a lively (and unfortunately still timely) cover of Heaven 17’s anti-fascism anthem “We Don’t Need This) Fascist Groove Thang.” The single also features the blazing original “A Complicated Faith” on the flip side.

Official News: With righteous indignation and a thumping four-on-the-floor beat, the recording marks the satirical punk band’s first new release since 2017’s Welcome to the End of the World EP—and a characteristically grim pronouncement on the upcoming Republican National Convention.

The band is also announcing the second pressing of the 7” (on blue swirl vinyl!), after the initial pressing sold out in less than 24 hours earlier this month. That pressing will be coming out on October 30th, perfectly timed to get you fired up to vote the current sitting fascist out of office!

Pre-Order at The Giving Groove: https://thegivinggroove.limitedrun.com/products/675724-preorder-the-dead-milkmen-fascist-groove-thang-7-vinyl-digital-download

All profits will be donated to The Dead Milkmen’s choice of Girls Rock Philly (https://www.girlsrockphilly.org/), a youth-centered music community focused on empowering girls, women, and trans and gender non-conforming people.

After Donald Trump’s 2016 election, The Dead Milkmen began covering the song in concert. During live shows [they] regularly tweaked the song’s lyrics to reflect the present [political] nightmare: “Trump's a white supremacist / Putin tells him what to do.”

Longtime Milkmen disciples may find the song’s message, with its warning of authoritarianism and “evil men with racist views,” reminiscent of the band’s own ominously potent protest song “Right Wing Pigeons,” released 35 years ago on the Big Lizard in my Backyard album.

“It sucks to be prescient,” laughs Rodney Anonymous, who was once a political science major. “I kind of feel for Cassandra in The Iliad. Because you’re like, “Man. I wish I’d been wrong about everything!” It’s like every day we’re living inside a Milkmen song. We tried to warn everybody.”