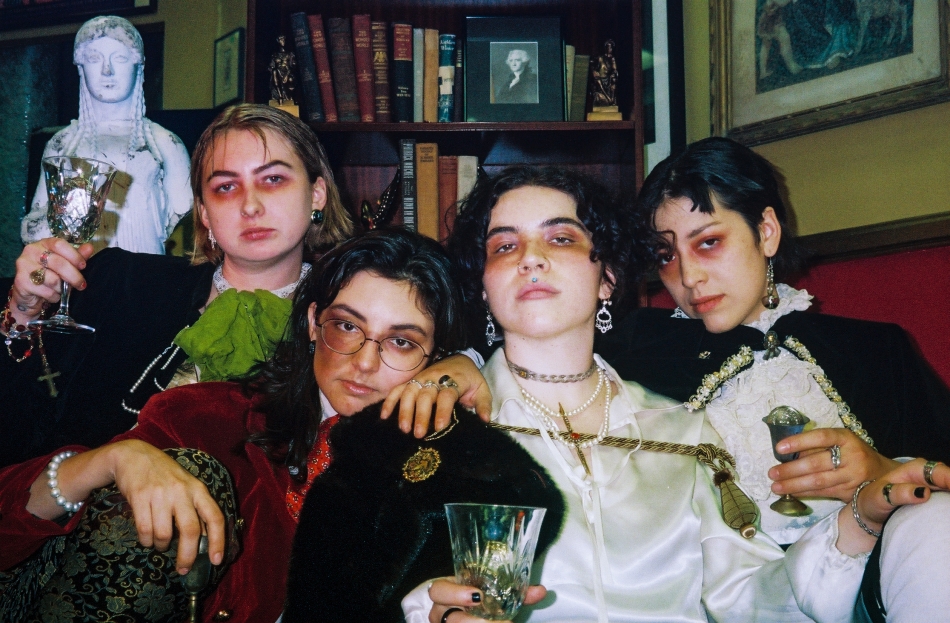 Best known as one half of Ensenada Mexico’s Lorelle Meets the Obsolete, Lorena Quintanilla’s completion of Hibiscus, her second solo album as J. Zunz, traverses through droning electronic terrain to create a vast world in and of its own. Her single for “Four Women and Darkness” takes on an echoing, minimalist trace, like entering a void with a haunting omnipresence that only seems to loom within your interior surroundings rather than penetrating from the exterior. Quintanilla’s vocals transcend that of familiar human inflections and instead conjure cathartic and sonic transmutations in her opening track for “Y”, her music video also taking on a clean and restrained aesthetic which make the shock of stained blood all the more powerful. “I wanted the songs to be everything I wasn’t at that moment: strong and fearless”, she states, using Buddhist and meditative influences to instill energy into a truly phenomenal eight track record. You can order J Zunz’s Hibiscus here via Rocket Recordings.

Hardly Art have an impeccable taste for building their roster, discovering acts like Taco Cat and Colleen Green in their fledgling stages. It comes as no surprise that they’ve signed Los Angeles’ quartet Girl Friday with their debut album, Androgynous Mary, released today on their label. Meeting over a chance encounter during their time at UCLA, guitarist and bassist Vera Ellen and Libby Hsieh bonded over their unique playing styles and eventually introduced drummer Virginia Pettis and guitarist Sierra Scott to the group, cohesive from the start in terms of their unwavering bond and their willingness to push musical boundaries. Deconstructing genres and sounds within a single track, Girl Friday take precious vocal melodies to intertwine them with a cacophonous breakdown in “This is Not the Indie Rock I Signed Up For” or interspersing distorted guitar riffs in their riotous anthem for “Earthquake”. Experimenting with seemingly clashing elements, the four piece stake their place as individuals while still rooting for each other in a massively tumultuous world. You can support Girl Friday by purchasing Androgynous Mary here.

Written at the start of the year and just a couple months prior to a global lockdown, Los Angeles’ L.A. Witch are no strangers to isolating yet their sophomore record, Play With Fire, is a bold anthem for taking life in your hands and crafting your own destiny. “Play With Fire is a suggestion to make things happen”, states vocalist and guitarist Sade Sanchez. “Don’t fear mistakes or the future. Take a chance. Say and do what you really feel, even if nobody agrees with your ideas.” The trio know just when to pummel their listeners with driving percussive force and when to slow things down to a lay down the mood with a sultry ballad. Merging psychedelic blues licks to aggressive punk and rock ’n’ roll, L.A. Witch traverse a wide spectrum of fuzzed out noise and a fierce call to action. For those of you that need a little escape from the drudgery of life and its routine, Play With Fire is here for you to stir things up on your next road trip getaway. You can purchase their album via Suicide Squeeze Records, with their LP pressing limited to 1,500 copies worldwide—1K on translucent yellow vinyl and 500 label exclusive copies on clear with red and black splatter.

Spun Out - Touch the Sound

Recognized as one of Chicago’s prominent indie-rock acts, the members of now defunct NE-HI  have formed their latest project, Spun Out, with their debut album Touch the Sound out today. Gravitating towards vast experimental sounds and incorporating synths in their danceable upbeat textures, the band has carved out new ground for a collective and collaborative consciousness. Enlisting the help of musicians from the likes of Destroyer's JP Carter and Deeper's Shiraz Bhatti, the trio kept an intentional open door to a variety of like-minded friends for their emotional sound processes. Their official music video for “Another House”, shot by collective Noble Savage right before quarantine hit, offers a carefree spirit of psychedelic and lo-fi visuals of the members seemingly captured in a single room yet immersed within elements of nature in their interior surroundings in their powerfully layered opening track. You can purchase Touch the Sound via Shuga Records here.