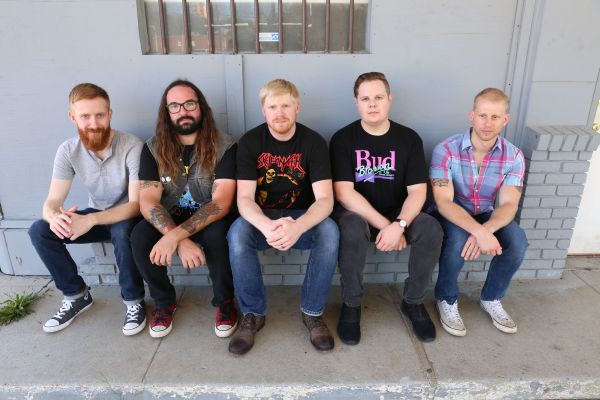 Rebel Noise is stoked to host the premiere of the sonically vibrant and dynamic, lyrically astute and reflective album in its entirety the day before it rolls out.

Benchmarks announced the arrival of their new album in July with the premiere of first A-side/B-side single “Our Finest Hour” and “Technicolor” via Ghettoblaster.

Earlier this month they bowed the single “Six One Way” with B-side “Wolves Outside The Door,” featuring renowned singer-songwriter Lydia Loveless, via New Noise Magazine.

The LP was produced and engineed by Whitis at BedBug Studios in Kingston Springs, Tennessee, with additional production by Farrell Jr. and Tousignant in Nashville and Scotty Sandwich at The Sandwich Shoppe in Durham, North Carolina.

The songs on Summer, Slowly are jam-packed with perceptive, complex, and poetic lyrics about growing up, and being a grown-up, facing all the challenges that life doles out and how to be a better person even amid the (external and internal) struggle.

Scintillating single “Our Finest Hour” flies by on hopeful wings with a speedy drum beat, fast-cycling guitar whirl with squelchy elements, a dancing bass line, and Farrell Jr.’s clear and earnest vocals ring out as he relates, “We’re all searching / for our own versions of Heaven over Hell / but nothing really changes / until we decide to change ourselves.”

The ponderous “Wolves Outside the Door” treads delicately with light guitar glow at its start, but picks up the pace later with a prominent drum beat, jagged guitar riff, and low bass undertow. Farrell sings candidly about the ghosts of the past and how, “…all the things that we try to ignore / haunt us in our later lives.”

Up-tempo indie rock ‘n’ roller “Six One Way” features a choppy rhythm of staccato guitar riffs, lively drum-work, and crashing cymbals on the verses, and then drifts into a dreamy reverie on the chorus with Farrell Jr. wistfully wondering, “Are we just waiting on these demons, / darker days, and seasons, / praying for a chance to see the sun?”

Pop-punker/indie rocker “Technicolor” both burns with smoldering guitar embers and shines with golden tangle of guitar lines, sweeping along with a driving bass push and punchy drum strikes.

The track is an encapsulation of how most of us are feeling during these troubling times, with Farrell Jr. stating he has a heart and brain, but that he’s, “just trying to keep the first from breaking, / trying to keep the other sane.”

The song’s intended topic of mental health is an important one, but one can’t help but think Farrell Jr. may also be referring to the current occupier of the White House when he pointedly comments at the end of the track, “…there’s a storm a-brewing / There’s a witch on the wind / telling lies and treason / and watching us give in.”

The band spill some details about the album, explaining, “This record is essentially about change. Personal change, social change, ideological change… Things we experience every moment of our lives, but barely comprehend until we look back.”

“While these songs were written well before the events of 2020, I feel like the themes have found themselves more relevant than ever.”

“The band has gone through a lot of personal change during the making of this record (new members, marriages, kids, etc), and the world has drastically changed as well. This is about embracing all of it and trying to come out the other end alive and breathing.”

And in an elucidating and sweetly poignant note, the band wrote the following message at Bandcamp: “This album is dedicated to our kids. May they come to know the thrilling adventures of life and understand (forgive) the aimless dreaming of their fathers.”