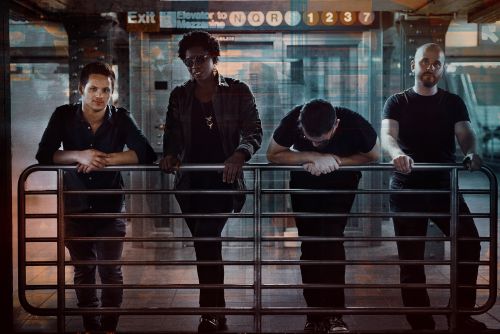 Liar’s Deception was produced by Frank Mitaritonna (The Dear Hunter, The Dillinger Escape Plan, Glassjaw) and follows up 2016’s Escaping From Velocity.

Signals Of Bedlam have dropped two tracks so far from their upcoming full length; raging “Take The Crown” and searing new single (with a DIY shot-on-iPhone accompanying video) “Twilight Rebel With Red Cap.”

Cartera explains that the track tackles the recent rise in the willfully ignorant and twisted who think that, “taking a principled stand against the poor and downtrodden somehow became the greatest form of patriotism.”

The band members have graciously taken part in our on-going Protest Interview series, shedding light on our common plight in the face of climate change, as well as the scourges of racial and economic inequity.

Signals of Bedlam is the place where 4 people with different backgrounds and approaches to music come together to agree on a common vision. We love a lot of the same music, and are drawn to it for similar reasons, but a lot of our tastes are also very divergent as well.

Signals of Bedlam is the musical commonality we can all agree on, and that's orchestrated, calculated chaos. The sort of music feels like it should be careening into chaotic pieces, but that gets held together by a beautiful melody, or a tight, locked-in rhythm. The tension between tight compositions and musical insanity. It's funny how sometimes they really are one and the same thing!

Climate and ecological breakdown. The current climate and biological emergency is leading us toward the collapse of civilization, or as Noam Chomsky put it ,"The end of organized human life." And we are careening headlong towards it because our current system is utterly incapable of prioritizing human welfare over the power and profits of a privileged few.

The scale of death, destruction, and suffering coming down the pipeline this century is so mind bogglingly enormous it's hard to wrap your head around. And the vast majority of the costs of this crisis are going to be borne by the world's poorest citizens, who did virtually nothing to cause it.

At the crux of this is a worldview that ranks human life, that sees certain people as disposable, whether because of the color of their skin, their country of origin, or if they're poor, a "loser" in a sham meritocracy.

We could go on for a while about this, so we'll just leave it there.

I'd direct you to our latest single, “Twilight Rebel With Red Cap”:

Rage Against the Machine – “Sleep Now In The Fire.”

"Raise your fist and march around / just don't take what you need." Polite rallies are limited when you're trying to force a system to do something. Real change has always come from people standing up and being willing to disrupt the status quo.

The strikes of the Great Depression, lunch counter sit-ins during the civil rights movement, ACT UP's confrontational tactics to get the country to acknowledge AIDS; these tactics worked because they were impossible to ignore, and the issues they illustrated were clear moral wrongs that the rest of society had tacitly accepted.

These things worked because these movements didn't ask for permission; they confronted the powers that be on their own terms.

Run The Jewels new song “Ju$t” is pretty spot-on too.

"Look at all these slavemasters / posing on your dollar." Just everything about that lyric.

Tom, our lead guitarist, has been active with Extinction Rebellion. Everyone in the band donates money to support efforts to alleviate global poverty, and for racial justice as well. We also all try to get out there and hit the streets when the time comes to make some noise, be it Occupy Wall Street or Black Lives Matter.

The Integral Heart Foundation in Guatemala does great work in alleviating the cycle of generational poverty in Guatemala through education and nutrition programs. They're a relatively small operation but very near and dear to our hearts as we know some of the folks who run it and how hard they work and how passionate they are.

At the end of the day, I think most of us can agree that no one on this earth should be going to sleep hungry, and have a chance at having at least some kind of choice about how they'd like to live their life.

The George Floyd uprising. Look at the legions of people across the country and world who demanded a better world than one that treats black life as disposable. There's so much work left to be done, but the mass show of support and defiance was truly inspiring.

The politicization and radicalization of young people as well. So many of them are realizing that middle of the road, status quo solutions just aren't up to the job of addressing the issues we face.