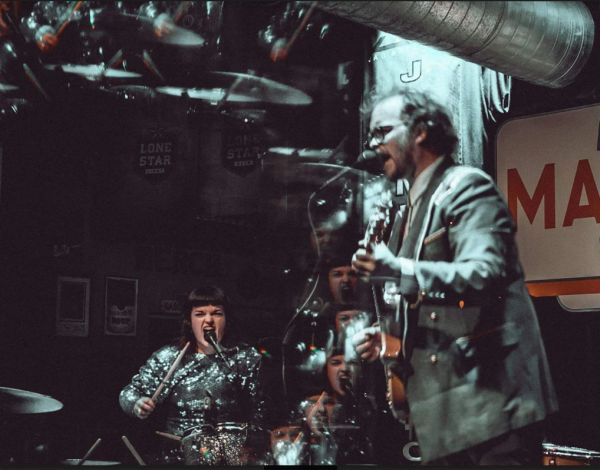 Volk is the Nashville-based dynamic power duo that roars with a mix of high-octane rock ‘n’ roll, classic country swagger, and heart-wrenching soul. Their live performances radiate with Texan Chris Lowe's (vocals, guitar) and Californian Eleot Reich's (vocals, drums) raw energy, pageantry, and wide range of musical influences. In the live setting, Volk is all about loud outfits (suit and shiny sequin dress, respectively) even louder amps, and an even shinier drum set. Lowe and Reich put on a damn fine and fun show.

This September, VOLK will release their second EP, Average American Band, via Romanus Records, promising even more earth-quaking, bombastic, yet tuneful cacophony. The EP was recorded at Threshold Studios in Indianapolis.

Rebel Noise has the pleasure of premiering the lyrics video for the first single off the EP, the upbeat “Hat n Boots”.  With its cocky guitar parts and potent drum beat, the song cavorts along with whimsical lyrics that poke fun at folks who tend to be “all hat and no cattle” (That's Texan talk for a braggart ya'll). Trevor Silverstein helped create this fun lyric video to capture the songs playful, over-the-top manner.

“Hat n Boots” is a little bit country and a whole lot of rock ‘n’ roll.  So get ready to get into the swing of it with the vocally feisty, restlessly toe-tapping number.