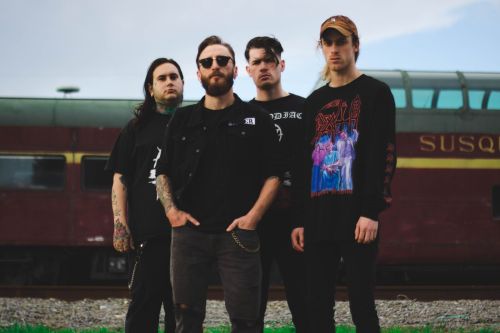 From deep down South in Louisiana, metal and industrial-inspired hardcore band Daemon Grimm have risen from the musical swamp to unleash their wickedly potent sonic brew.

Daemon Grimm was formed by a few close friends in 2016 when they began to write music together and play live in their native New Orleans region. As the band’s reputation for being a ferocious live act grew, so did the audiences at their shows.

In 2017 Daemon Grimm released their self-titled debut EP and expanded their performance circuit to include neighboring Mississippi. The EP’s lead single “Peaceless World” is a relevant and prescient slice about the destruction of society and latest single “Riverbed Deadener” bowed this past May.

Rebel Noise is stoked to host the premiere the video for the relentlessly raging “Big Bad Daze”, a powerful new tune in the band’s arsenal – and the title track of their next EP. Shot and edited by P Dollaz, the performance video goes full bore with Jake Walker on vocals, Brandon Landy on guitar, Nick Moore on bass, and Brock Champange on drums.

The grimy black ‘n’ white footage of the band belligerently slamming the song back is shot through with evil green lighting and agitated camera movements. Scenes of heavy drinking and drugging are intercut with the intense live show, which mirror the raw song lyrics about obliterating the bad times in life by getting wasted – but, in a vicious cycle, wasting your life away by getting smashed and high.

The band members give the backstory to “Big Bad Daze”, explaining, “Lyrically [it’s] about having a good time to forget the bad times.  It’s about coping with your pain by just getting trashed and out of your mind to try to just stop your brain and thoughts, and catch a break from everything bringing you down.  It’s about becoming friends with your demons rather than trying to defeat them.  In a way, it’s about giving up and saying fuck it all. Lying to yourself by crowding yourself with distractions instead of solutions. It’s about living in your own personal hell that you allowed to consume your life.”

The guys in Daemon Grimm took some time out to reply to a few Qs about their music and what’s ahead for them as a band. Check it out!

Hi guys! “Big Bad Daze” is your raging new single. What was the process of writing and recording that song like?

“Big Bad Daze” is the first 6-string song we wrote after only writing on 7-string guitars for like a year or so. We were at practice just messing around, jamming together, putting riffs together. We kinda improv songs as we write them, structure them a lot on our own, and then take our ideas to the studio.

In the studio we definitely tightened “Big Bad Daze” up a lot from its original form, but the main riffs are all there. Vocals really helped put the song together for us too.  Once those were organized and recorded, we couldn’t wait to share this one!

You guys are really busy these days. What's the next goal for the band? More local shows? A tour? More videos? Tell us more!

We like to play local at least once a month if we can. It helps us make some money to put back into the band.  Playing shows is always fun too. We all work full time jobs right now to save up for our goals and bills.  Next up on our goal list after Big Bad Daze EP is buying a van to start doing some runs in our southern region and spread the word of Grimm.

We want to keep writing and progressing as musicians and give our fans something that’s a little different than a lot of other things out there, but definitely influenced by the legends and bands doing their own damn thing.  We want to tour full-time of course, and see how far we can take Daemon Grimm. We are aiming for worldwide!

Is "Big Bad Daze" a good example of what we can expect to hear on your upcoming EP of the same name? Any surprises in store for us musically?

“Big Bad Daze” is a big great taste of what’s to come.  As far as surprises, keep up with what we’re doing and you’ll find out. *cough* Follow us on social media!

You blend a variety of disparate genres in your sound. Where do you find inspiration for your music?

We four dudes find inspiration in other music, no matter what the genre.  Everything from all forms of metal, indie, alternative, and rock to hip hop, rap, R&B, and everything between.

We find more inspiration in our daily lives and even some fucked-up situations we’ve been in. We are inspired by our pain, our hurt, or whatever the hell you want to call it.  Grimm is therapy for all of us. We come here to write music and get some shit off our chest! Playing our music and just getting together with the gang is inspiring in itself too.  We’re all stoked to do what we do and jam!  And also the hope of getting some fans and raising some eyebrows along the way.

What bands do you want to give a shout-out to that you’ve played with and/or are inspired by?

Watching your friends jam and write sick music together is honestly so inspiring in itself.  Seeing your friends do what they love and progress with it is so sick too.  We’ve made lots of friends playing shows - and some that you might not know and should -  like locals like Swamp Stank, Hollow City, Hand Out, R O G U E, Downcast, and so many more.  Our scene has a lot great artists/bands coming out of it and Grimm is proud to be from here.