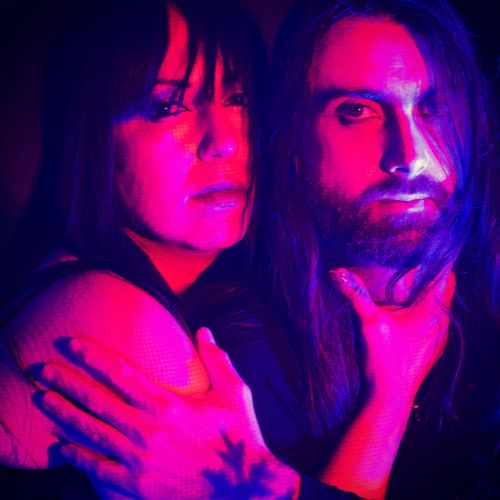 Originally from Australia dark post-punk-inspired duo Night Tongue are now based in sunny Los Angeles. The band consists of Carisa Bianca Mellado and Andrew Dalziell, and together they create transfixing music that’s filled with passion, doom, and mythology.

Night Tongue will be releasing their debut album, The Stag King, is set for release on October 11th. In 2017, they released their first EP, Achelous + Melpomene, and in that year and the next, they composed scores for short films and plays.

Rebel Noise is thrilled to host the premiere of the video for the forebodingly noir “The Flood.” The chilling video mirrors the song in its haunting and crepuscular atmosphere. The viewer is treated to a first-person, driver’s seat view of a winding road that disappears before the eyes and the miles tick by. As the camera flows through every curve of the highway, the viewer comes along for the ride.

This video footage is intercut with disquieting clips of a woman by the sea at night, crawling along the sands, and at one point, with her wrists bound with a held-taut pinkish-tinted rope… The end of the video finds her walking down a rocky slope on the shore with the suggestion that she has escaped from some hidden place.