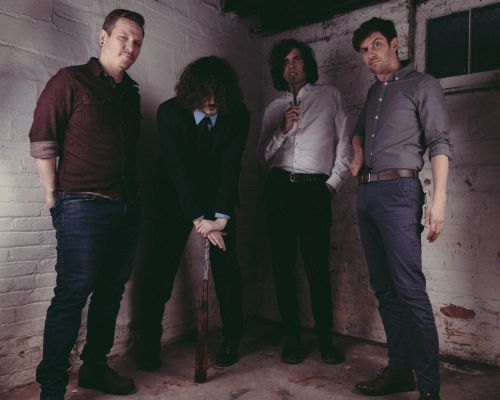 The members of Cleveland-located alt-/garage-rock band King Buu don’t take themselves too seriously song-wise and with record titles (2017’s Hold Onto Your Butts, anyone?). But that’s the joy of outfit of four mischief-makers.

Formed in 2016 by singer Mike Madgar and guitarist Cameron Milani during a bagel break, King Buu also includes bassist Erik Marsh and drummer Wesley Who. They tackle all the usual fun issues, like death and addiction while adding a dash of sci-fi and horror elements to their self-described “modern warehouse rock.”

Their latest endeavor is the upcoming album The Ballad of Tin Erik, an alt-country and sci-fi inspired concept LP about the fight between good and evil. It will be released on September 13th.

Ahead of the drop date, Rebel Noise is pleased to host the premiere of the sonically jaunty single “Free Ride Out of Town.” Absurdity seems to take a back seat on this upbeat track that’s peppered with a jittery rhythm.  Madgar’s freewheelin’ vocals flow like the beer in the bar of the song’s lyrics. All in all, the number harks back to the catchy rock ‘n’ roll era.

The band’s description, however, gives the cut another dimension as they explain, “Often described as "Oh, that Spanish song" while having nothing to do with Spain or Mexico, "Free Ride Out of Town" details the adventures of our hero Tin Erik trying to enjoy a night on the town. He is repeatedly thwarted by his love's interest in another's blood.  The scene begins with a man, or possibly man-child, being attacked by a small dog before the signature riff and cymbal rhythm take effect. The almost-sing-a-long chorus helps add a communal feeling to the descent into darkness and escapism described in the song.”