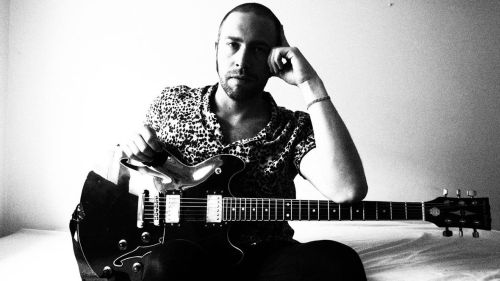 Ahead of his new album release, producer and musician Kurt Baker (The Leftovers) unveils a new video.

Baker has been releasing a few singles from the LP, and the tuneful “Outta Sight” is one of them. Blending his signature indie garage rock and power pop styles, “Outta Sight” is packed with sweet melodies and grittier dynamics.

Rebel Noise is stoked to host the premiere of the video for “Outta Sight.” The clip was produced by Wyatt Funderburk and shot on Shot on location in California, New Mexico, and Bardenas Reales, Spain (where the Maine-raised multi-instrumentalist now resides).

Baker has mostly shed his pop-punk roots from his days in The Leftovers, although the core of catchy melodies still comes into play.

Natural landscapes are the focal point of the video, but the realistic footage is covered with hand-drawn ink overlay to give the scenery an animated feel. Baker is shown in the various locales walking around and performing to the camera.

Baker reveals some details about the track, explaining, “The main influence on this track is the band Single Bullet Theory. They had one record in the early ’80s and are mostly unheard of, but Wyatt and I love them. Wyatt actually found two vintage Single Bullet Theory T-shirts on eBay and picked them up for us. When they came in the mail we sat down and wrote this song off of an idea I had for the chorus. We wanted to build up each chorus so that by the very end it was really big. I think it’s the perfect closer to the record.”