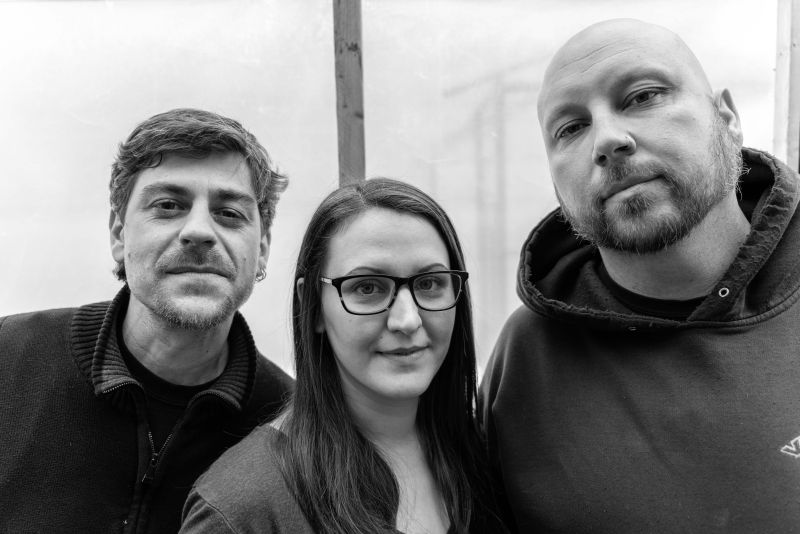 Operating out of Quebec since 2015, Canadian melodic punk band The Last Mile is packed with talented musicians from other acts.

Formerly named Chris Snelgrove & The Last Mile, but with a edit to the moniker in 2019, The Last Mile is made up of Snelgrove (Prevenge, Whiskey Trench, Offside), Stephanie Cole (Answers), and Josh Carothers (Chilton, Ifarm, Funbox).

They’ve been playing shows in over 30 countries in these few short years, and are champing at the bit to get back to the live circuit that was curtailed by the pandemic.

In 2016 they released the full length The Distance Between, and in 2020 they dropped the two-song 7” titled II that featured Scott Wade (Comeback Kid) and Patty O’Lantern (Brutal Youth), and a grittier sound.

The next full length, Respect The Frequency, is set to release in the future through Rad Girlfriend Records.

Ahead of the LP’s arrival Rebel Noise is stoked to host the premiere of the music video for the energetic and passionate track “Skyline.”

The music video flies by at an equally swift clip as the camera focuses on a guy running through the city streets, each building, mural, monument, and sidestreet being captured for a moment by the lens.

But then the view shifts to people’s faces – those who really matter in the end. It’s not what has been constructed that is important, but the connection to the people who’ve touched our lives… And through the song and video, Last Mile deliver a message of resilience and hope in an increasingly complicated and conflicted world.

The band members comment, ““Skyline”is about growing up in a place and constantly trying to leave it, sometimes successfully for many years, but there’s always something that brings you back. Sometimes, coming back to where you grew up can be a very negative thing so you try to hold onto the things that you loved about it.”

“Oftentimes, in an ever-evolving world, things that you remembered, things you used to hold dear, are gone and have been replaced by modern atrocities in the name of progress. This can lead to feelings of no longer having a foothold of what formed you.”

“The actual skyline that you remembered has changed and the city or town that you once knew like the back of your hand has become completely foreign. It’s at this point where your fight or flight reflex kicks in and you remember that the things that are actually important about the place aren’t the structures but the good people who still live there.”