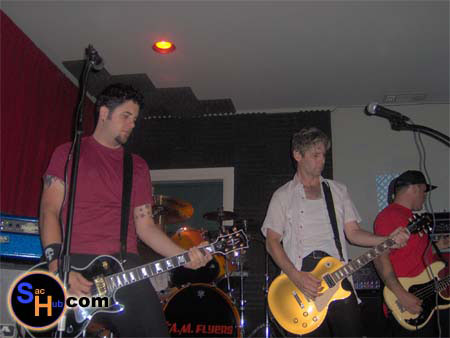 In the early summer of 2000, while their other projects were on hold,Zack Charlos, and Tommy Waugh had a brilliant idea; "Instead of waiting for things to pan out, let's try something new." After writing just a few songs together, it was obvious that the chemistry was there. Over the next year, their other musical projects started falling by the wayside, and this one became a serious priority. With a fistful of songs in hand, they set out to find not just a drummer, but the right drummer. They merely opened Zack's old high school year book for the answer. Zack remembered the kid who stalked campus with

drumsticks in his back pocket. Coincidentally, Tommy had already been thinking of Jeff Piehl, to fit the bill, as they had been hanging out for years at the Phoenix Theater (an all-ages staple of the Bay Area underground music scene) in Petaluma, CA. The trio gelled immediately, and soon began their search for a

second guitar player. While guitar players are not rare, this one had to be the perfect additive to the chemistry already in motion. Tommy's employer, Mesa/Boogie (world-class amplifier company), had just hired a new amp tester (A guy who plays guitar all day). At only 22,Marcus Daniel really stuck out. He was playing Boston, Cheap Trick, and a thousand other great guitar riffs. He could have just as easily been into

Rap-Metal, Ska, or even something more uneventful. His playing style, and technique made a rock-solid connection with the power-riff pop they were already pumping out. In the Mid-Summer of 2001, the line-up was complete and the live

shows came in droves. And we haven't looked back since. While it's hard to sum up who we are, and where we're going, in just a couple of paragraphs, we can tell you this;

All we really know is that we are a phone-guy, two amplifier makers, and a drag-bike welder. It's truly champagne taste on a beer budget. So come and celebrate headaches, heartbreaks and hangovers with - The A.M. FLYERS